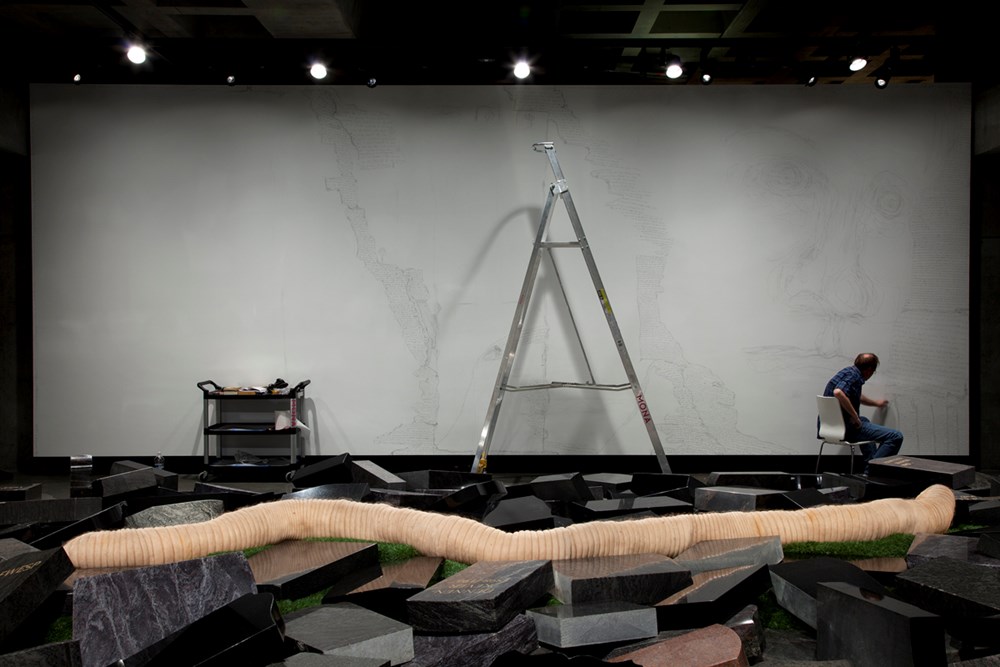 Background: Jeff Gabel at work. Untitled (work in progress), courtesy of the artist, 2012

Jeff Gabel lives in New York and works in a library. He makes art when he can, ‘because he can’; ‘and just because you can means that you probably should’, he says of art writ large. The same goes for drinking on the job (the art job, not the day job): he routinely, when working on a show for a gallery, sips beer as he works, being careful not to peak too early and have the hangover set in before his day's work’s done. The beer is ‘for fun’ and because you’re not allowed to drink beer all day in other areas of life. At Mona we’ve decided to supply him with Moo Brew for the duration of his installation of his work; if you squint your eyes, you can almost convince yourself it’s an important part of his creative process. He just asked politely what he should do when his issued carton started running low, which would be ‘by the end of today’. I told him just to let Nicole know. The truth is, he seems more interesting in his art than he does in real life. I don’t mean that as an insult at all, it’s just that he does seem very interesting indeed in his art, and in reality he’s – not at all normal, but operating according to the objectives surely common to us all: to do what seems right at the time, with a vague and patchy sense of how things will pan out long term, remembering when we can to attend to the supposed lessons of the past. I guess sometimes it seems, when the outcome is novel and surprising, that the work of an artist is imbued with a more embracing purpose, such as to help us better understand something about ourselves, the audience.

The source for his new work for us – an illustrated narrative, evolving (as I write this) on a wall in the museum – is the short novel Amras by Thomas Bernhard (1964), written in German, and imperfectly translated into English by Jeff. He likes the book because the sentences are notably complex and difficult, rather than for its content, which is horrendous: a family tries to commit suicide to escape the torture of epilepsy (which they all suffer from) and two of the sons are saved against their will. They live in a tower for a while thinking intensely about how life is supremely shit and then one of them kills himself and that’s the end. So this story as I said has been translated mostly on the spot, and in an amateur manner because Jeff doesn’t actually have the skills of a professional translator at all, and anyway that’s not the point (if there is a point that’s not it). He might also draw on a novel by Carl Zuckmayer, the title of which translates to English as The Moons Ride Over (1935). This one he’s read a million times in languages he both does and does not understand, which seems a pretty strange and unpleasant thing to do. He has created an online lived reality (as such) for Zuckmayer’s book: each character, from the protagonist Thomas Stolperer to a policeman with a walk-on one-liner, has a Facebook account and interacts variously with the other characters (Thomas is in an ‘it's complicated’ relationship with the waitress Mena Morandell). Apparently this is not art at all, it’s ‘just for fun’.

The drawing, like I said, is unfolding as we speak (if you’re in the gallery please approach him for a chat, he loves it when people do that). It flanks another new work we’ve dragged out of the archives: a mess of tombstones over which crawls a giant silicone worm bearing the face of the artist (the Belgian Jan Fabre), muttering the words which translate from Flemish as: ‘I want to draw my head out of the hangman’s rope of history’. David first saw this work at the Louvre, surrounded by Rembrandt, Rubens, and Vermeer. It’s decidedly shitter here, how could it not be? But still, we like it a lot, and hopefully you do too.