Does my brain look big in this?

Yves Netzhammer’s The Subjectivisation of Repetition is on display at Mona now. It is a prelude to our exhibition The Red Queen, which opens on June 18.

It’s the interiority of it. The quietness. Like being underwater. But I think that’s its intention (one of them, at least). With The Subjectivisation of Repetition, Yves Netzhammer cuts together this mesh of vignettes, these lyrical short scenes that shrug off conventional ways of meaning to instead offer an internal panorama of a human mind. Whether this mind is intensely personal or inclusively collective, I’m not sure. But I’m not sure this matters entirely, either. It works both ways, answering and unfolding itself to one consciousness at the same time that it holds quietly and firmly to its de-individuation. The first time I saw the work, I tried to organise my thinking about it by overlaying it with an explanatory narrative. It didn’t work. It was an imposition, but perhaps a forgivable one (an elaborate, gestalt-inflected knee-jerk). There’s no endpoint here. I see that now. There never was. 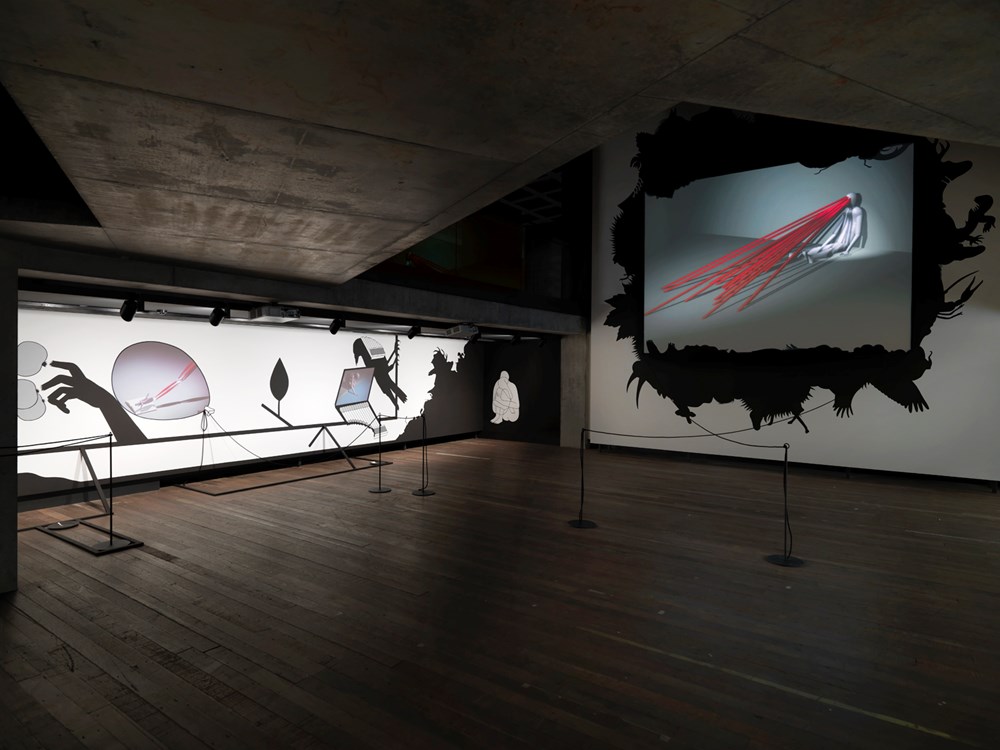 Suddenly the title jars. It’s another imposition, warping the structure by which I understand this artwork and imbuing it with grandeur and deflection. It’s self-aggrandising and knowing, and it seems to promise a final answer that is at complete odds with the guts of the work: this quietly precise consideration of human interiority. I wonder if the title, with its implicit refusal to make its meaning clear, seeks to align the work with the art world and art criticism more broadly, with their (perhaps not so) unspoken dictate of insular exclusivity and all that frustrating pomp and vagueness. I don’t want to encounter this artwork so publicly. I don’t want that context. No back-story, please. I want to meet it in a darkened room. I want to forget my own contours. I want to overlay my own interiority, my own panopticon of thought, with the installation’s precise and elegant shadows. I want to do this unashamedly and without the self-importance that the title seeks to impose.

It’s necessarily subjective, of course it is; how could it not be? It’s curious to think about how all this stuff, this torrent of information that slams silently into us with every second, becomes part of our own idiosyncratic ‘thought imagery’ (Netzhammer’s own term). As bio-cultural structures of information and patterns and biases and quirks, humans devour their surroundings and cannibalise their memories. We’re helpless against this insatiable and subcutaneous greed. Information gluttons. Endless recapitulation. It’s ugly, but it’s a leveling move, and I’m more aware of myself within this violent playing field of information exchange.

Netzhammer’s work repeatedly interrogates this process of encounter and exchange, of how humans, animals and environments come into contact and the associated fall-out of these interactions. Gaze upon the walls with their enveloping black and white miscellany. But within this, how does one thing encounter another? What’s involved? How does a mind decide what to do, what to discard, what to imbibe? How is the violence undertaken? A faceless automaton slices open the thigh of its shadow-self and fills the bloodless cavity with teeth. Human figures crouch outside a rustic building, and then suddenly collapse. Static fingers snap fresh from apples. Innards are just more surface, just another artificial crimson plane. A mosquito sucks at a disembodied vein; perhaps it’s a root system, reaching out to burrow itself into that black mass. Someone holds a whale’s eye in their arms. It’s horrifying and unaccountably sad. What I’m trying to say is this: I’m unconsciously feasting on everything around me, digesting it in my skull and I’m unaware. It makes me feel less evolved than I think I should be. Like I’m only partly in residence of my body. I’m pissed off that I’m not conscious of this process. Why can’t I be privy to the whole interiority of my brain and mind, the whole psychological kit and caboodle? The frustration is exhausting, and I feel cheated. I was given access to pages of installation blueprints for Netzhammer’s piece, along with a huge email conversation between various curators, exhibition designers and the artist. One line from Elizabeth: ‘the whole thing gives me a headache.’ For a fortnight, I was trapped in this mesh of lancing computer-etched lines and badly punctuated emails. It was my first encounter with the artwork and I felt ripped off. The point is, it was supposed to be a clarification of the work. It wasn’t. Noise. Excess fat. Communication breakdown. (I need to listen to more Led Zeppelin.) Mutual consciousness can be synonymous with white noise, and then everyone’s screwed. Shut the fuck up. Shut the fuck up. Fetch me the paracetamol, stat.

What I’m struggling with is the gradual piecing together of this work. It refuses to submit, to yield itself, to unfold completely, to remain splayed in the air and ripe for scrutiny. I don’t know where it begins. I can’t work out what to privilege. Those walls have bloomed silhouettes. Black cords ribbon from the plaster in perfect, looping lines. Teacups sink into the floorboards. The precision of it, of all of it, is shocking. It’s changed again. Expanded. I’m surrounded. (I was going to write this: ‘It’s impossible to watch. It becomes untenable to maintain that distance between yourself and the work. Impossible to watch because the verb itself becomes inadequate; this installation is something to be entered.’ But apart from that hideous act of trite italicisation—ugh, typographical gag—it sounded far too, um, penetrative. Which is just wrong; although for something so overtly sexless, the installation is refreshingly seductive. Don’t bother with dinner; Netzie, I’m yours.) I wonder if I’ve become the focal point, the empty centre. I’m worried about this, about the possibility of my subsumption. It’s problematic. Potentially. Things (ie. me and what I hold to constitute myself) can be swept under the carpet. Effacement is one bitch of a broom, and I resent that; I resent the idea that I might need to be emptied out, disembowelled, at the feet of a great work of art. I won’t lie; I shan’t. I’ve been coaxed into bed and I don’t know which way to turn. The uneasiness of it. I’ll insist, resolutely, that I’m still here. Meshed thoughts. My limbs. Brain, belly, cock and soles. It’s hypnotic.

I don’t bother with the title. I don’t nit-pick at the bastardisation of language. I walk into the gallery and stand beneath that concrete pentagon. It’s an aquarium of thought. The visibility is average, or the clarity of the content, visually at least, appears shifty to begin with. The Shurer’s hypnotic; I try to decide whether or not to resent this. I used to know this space, this artificial cheap wooden forest on an oil-aged wooden floor, with its crap technicolour sun spinning gracefully in the gloom. I’ve spent hours in this dark structure, now unfamiliar and haunted by blueprints. I don’t know where to stand; the periphery flickers relentlessly. It makes me want to overtly interrogate what’s swimming about in the tank of my skull and what that stuff (the conscious stuff, not the meat and fluid) could look like, what it might manifest itself as, thrust exterior to bodily confines. There it is, lanced to the walls, over-determined already by its own projection. It fails, instantly, at the moment of its success. I’m perennially shocked to realise that other people have their own internal realities and that they might be the same as my own. I’m embarrassed, and yes, I have a headache.

Actually when someone doesn't be aware of then its up to
other viewers that they will assist, so here it happens.