I mentioned in my interview with Daniel Mudie Cunningham meeting the artist Nell (no surname) the same day. I left it in the transcript because I wanted to segue into this.

Nell’s currency for us lies in the fact her silver poo has been selected for inclusion in the upcoming exhibition at Mona. 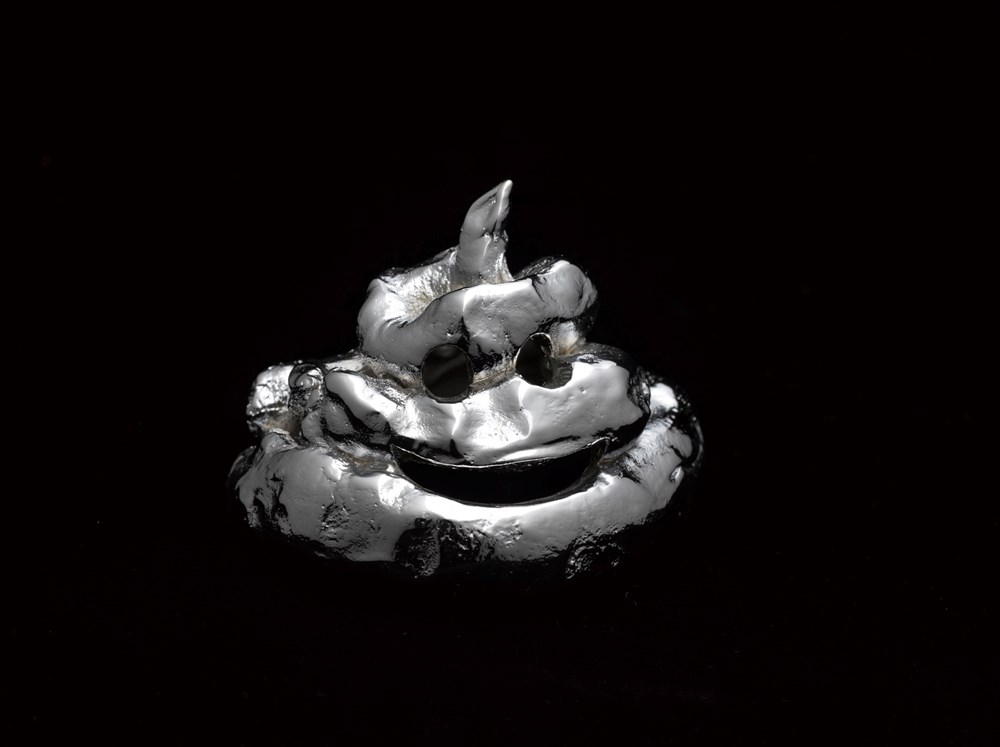 The exhibition is large, and curated by Jean-Hubert Martin, in collaboration with TMAG (Tasmanian Museum and Art Gallery). The thrust of the show is silent aesthetical resonance: to not teach anything about art history, but to place the onus of pleasure on the viewer, via their visual register. Homi Bhabha calls this register the ‘scopic drive’, in reference to the desire to visually possess and categorise that which is different to the self. Homi Bhabha is a postcolonial theorist. I mention him because the show raises some hair-raising questions about power relationships between France and Tasmania, TMAG and Mona, indigenous and non-indigenous art. I’m not sure where to start with those yet. In the meantime, I missed a vital piece of information: the show places all sorts of art and artefacts, zoological, historical, decorative, functional, from different periods and places, alongside each other, under the rubric of visual congruence. It’s called ‘Theatre of the World’.

Me: I’ve seen bits and pieces of your work and I cannot for the life of me pick a thread. Is there something that holds it all together?

Nell: Yeah. Me. I’m different every day. I think people end up with signature styles, kind of an accent in a way, but my accent is just who I am. Maybe it’s not really so good in the market place, but it’s just who I am and what I do. I feel like I can do anything or be anything in a really freeing way.

Please note: my first ‘I’m not sure about’ is a euphemism for ‘I don’t like’; my second means what it says. Her answer, above, helped me understand and categorise.

Me: There’s obviously so many different ways in which people make art – if it’s conceptual, like if you really want to pose an argument or raise questions about the world we live in, you find a way to do that. Or if you just compulsively draw as a child, and then one day people start to buy them. How did that happen for you?

Nell: I think because when I grew up I was pretty bored for stimulation.

I like this. I feel the need to say, I’m no Buddhist. I asked Nell a bit more about happiness, forgetting, really, that that was the name of her work, the smiley little poo. Some say you make better work, better works of creation, when you are unhappy. I have been wondering lately, in happiness, whether I would still want to write about anything, for instance. David my boss says he keeps things incomplete because he needs to let human feeling seep through the cracks. He said this when he was going out with a woman who made him unhappy; I wonder if it’s still true.

The other currency, that’s running out fast as time passes, is that Nell performed for us at MOFO this year: she put on a triptych, a three-paneled piece, that included a chanting group performance, an installation, and a truck-ride through Hobart singing ACDC’s Long Way to the Top. 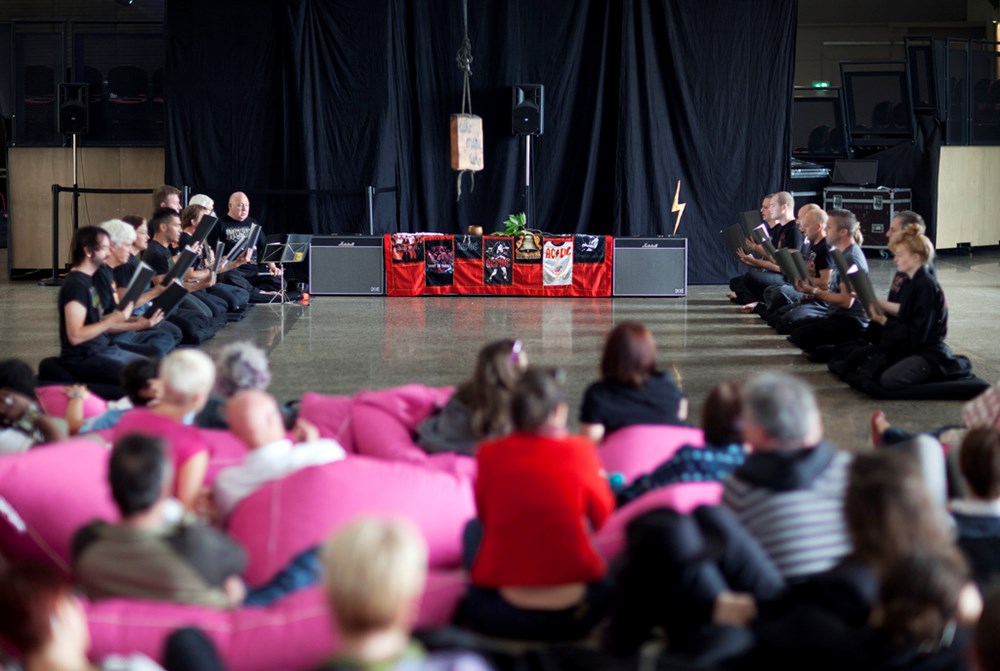 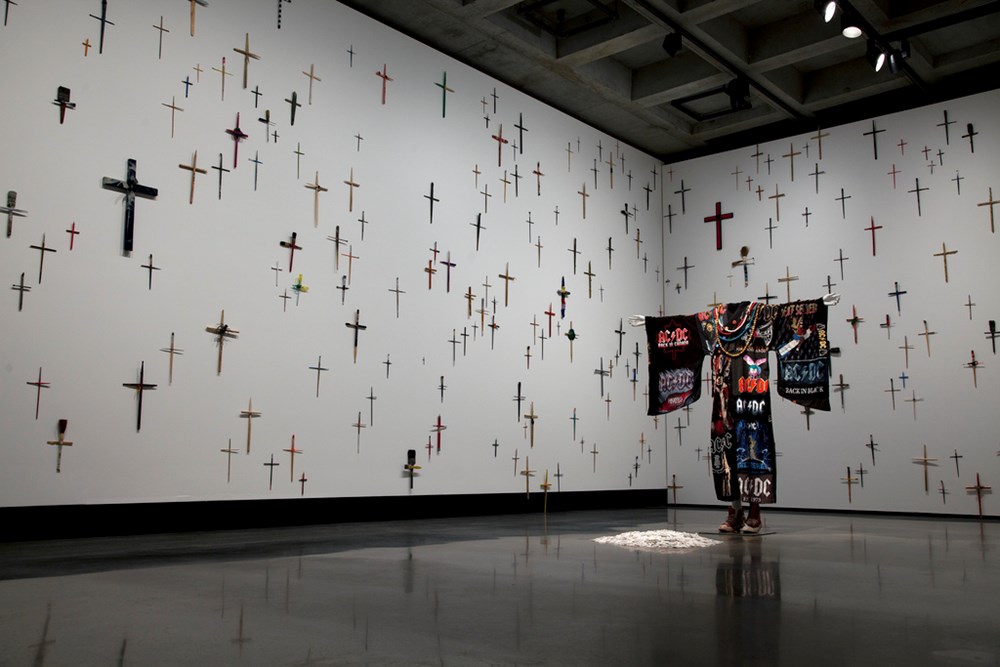 Let There Be Robe, NELL 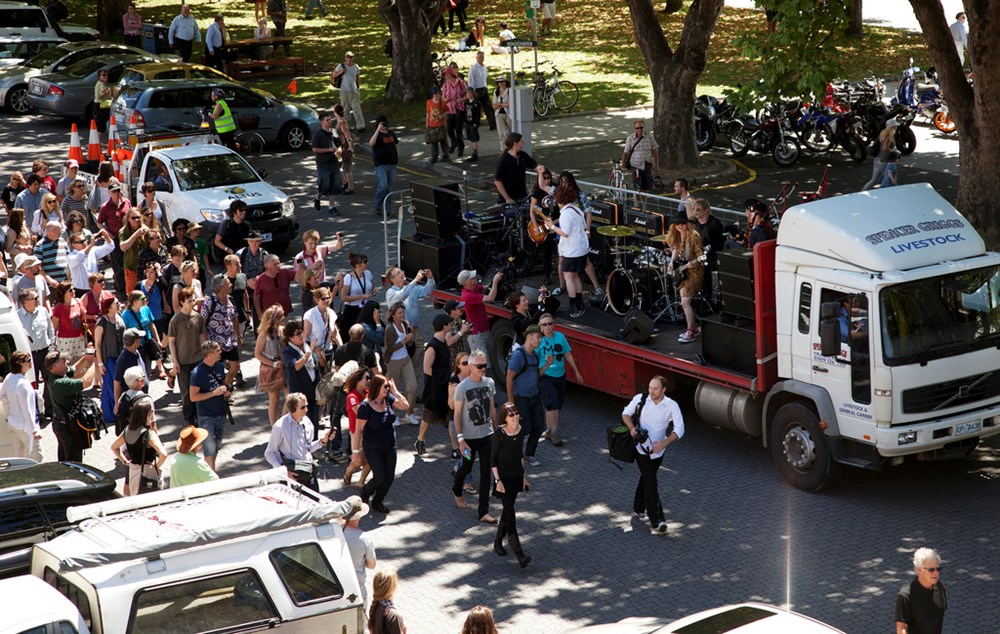 Long Way To The Top, NELL

The cohering motive of the triptych, she says, is ‘kind of that simple: I love rock and roll. Rock and roll and church were my first aesthetics, and Buddhism was my later one, and they all just mish-mashed’. She said she had always wanted to play music, but had ‘absolutely zero’ musical aptitude:

Nell: I thought, well if I can make mosaic and tapestry and make bronzes and glass works and all these other things, why can’t I just apply that same open-hearted, open-minded mindset and get people to help me, and just learn how to play?

Nell: I say I’m an artist. I imagine most people you interview would say they are artists, right?

Me: It splits, it goes either way. If you think about making art as looking askance at the system, or being sensitive to the system in a way that directly creates something, then to identify professionally, ‘That’s my career’, it can be a bit of a conflict. But you don’t seem to be conflicted by much.

Nell: No. I’m not sitting here torturing myself. When you pay studio rent – that’s when you know you’re an artist.

Me: Right. It makes me think about last time I was in Sydney when I interviewed Del Kathryn Barton, and she was saying the exact opposite of what you’re saying, that it’s all about self-torture, that’s her whole game with herself.

Nell: I know. You know she’s my best friend, don’t you?

Nell: Yeah, she gave me my [bunny necklace]. Yeah, she’s my bestie. No, we’re very similar, and very opposite. I told her, ‘When you learn to be lazy in your paintings you’re going to be a really great painter’.

Anyhow, so the poo’s in the show, and we’ll see with what it visually resonates when things kick off in June. In the meantime, we’ve just hung some fresh Bartons.

Oh, I really enjoyed this. It made me feel really awkward reading it. I dont know if you two got along very well. It definitely makes me like Elizabeth and not like Nell so much. Is this the writer's bias shining through?

Thanks Crin. Good journalism should always make you feel hideously awkward, and also make you like the journalist more than her subjects, so that's ideal really. You weren't convinced by Nell's answers? Or something else?

You do realise that pooh is spelt with an H, right?