There's a wolf in your head

As children, my sister and I would go to stay the night at our grandparents’ house on Chapel Street, Glenorchy. I’m not sure how old we were and only have a hazy memory of the house itself. What I do remember of Chapel Street, and vividly, is what lay beneath the house. Whilst our parents were drinking coffee with Nanny Grace in the kitchen, Grandad would take Erin and I to venture under the house-proper, a terrifying place reached through an ancient wooden hatch-door. Erin and I would steel ourselves to take a few shuffling footsteps into the gloom, the air thick with the reek of cold bricks and bristling possums. These monster marsupials would freeze, staring us down with their glinting eyes, electrified marbles in the darkness.

Being taken to look at the possums under the house was a regular occurrence. The memory of these visits is like part of a story, one that I sometimes remember is true. (I also suspect that it has lead to my inability, as an adult, to be able to sit through any werewolf film; my childish impression of these possums is suspiciously lupine). The more I think about it, the more obvious it seems that fear, or terror, is an inescapable part of being a child (how else are we to pave the psychological foundations for the neuroses that emerge later in our lives, those behavioural and mental patterns that make us so attractive and repellent to other people?). Just read Treasure Island, a quintessential childhood novel, and note how much of the book Jim Hawkins spends in a state of paralysing terror. Proper fairytales, not that saccharine Disney tripe, are drenched in gore; 'And they all lived happily ever after' arguably means so much more when someone has escaped ending up dismembered in a bathtub full of blood and hacked limbs. The deep, dark woods of storytelling are not a very nice place. Everything is not going to be alright. Chances are the big bad wolf is going to fuck granny, suck her bones dry, screw the axeman and then sit around discussing morals with you over a hot cup of tea.

'I’m going to tell you a story,' my Grandad would say. Erin and I would be tucked up in bed in the spare room at Chapel Street. Scratchy sheets pulled tight to our chins. Grandad would begin his tale.

'There was a Boy whose name was Jim;
His Friends were very good to him.
They gave him Tea, and Cakes, and Jam,
And slices of delicious Ham ...'

We would instantly be filled with terror, unable to move and equally unable to stop listening to the tale of Jim. (Like a visit under the house, we knew this awful poem very well). These opening lines paint a fairly innocuous picture, even a pleasant one. What a lucky boy that Jim is. His friends are so nice to him, even if they do display a slightly disconcerting penchant for feeding him. But, oh, what horror the latter lines of Hilaire Belloc’s poem hold. Shit gets real when Jim escapes Nursie’s hand whilst at the zoo. Alas, his freedom is short-lived when he runs straight into the jaws of Ponto, a rather hungry lion. (One has to wonder if Ponto had brokered a deal with those suspicious feeder-friends of Jim’s. 'Feed him up,' Ponto might’ve snarled over the phone. 'Feed up the little porker then send him my way.' Who knows; maybe Nursie was in on the deal too. Jim must’ve been a real little twat).

'Now, just imagine how it feels
When first your toes and then your heels,
And then by gradual degrees,
Your shins and ankles, calves and knees,
Are slowly eaten, bit by bit.
No wonder Jim detested it!'

Mr. Belloc, just like my Grandad, seemed to relish these deliciously metred lines. We did not. Oh, the horror. (NB: Grandad’s recital of the poem was very much a performance piece, and a brilliant one, complete with requisite snarling). We were powerless before the hypnotic drawn out terror of this tale, a carefully measured concoction of words, tone and pace. Trapped within its iambic rhythm, Jim’s fate (and ours) would be sealed from the beginning as the lines galloped along. The story of Jim (which I have included below in full) has an important place within the mythology of our family. It is a common literary trauma embedded within us. Erin has also written about listening to 'Jim'; for us, there’s something there that we need to revisit and deal with.

There is a piece in the museum called The Blind Leading the Blind, by Belgian artist Peter Buggenhout. It is a sculpture. One of the materials used to create it is household dust. It hangs from the ceiling, looming out of the shadows. It fills me with anxiety, with dread; my diaphragm tightens, the skin of my neck crawls and I dare not turn away from this twisted black mass. Is it part of the ceiling? No; it is a wolf. This art piece shocks me, and the shock is one of recognition. 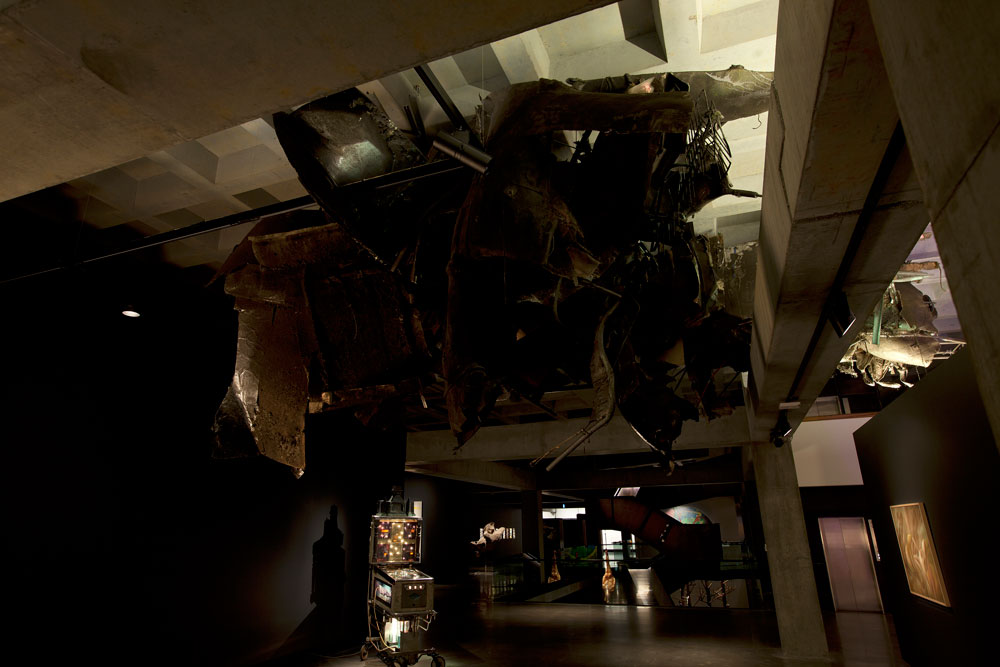 The Blind Leading the Blind

Most people, I think, are haunted by certain dreams. The brain is a bizarre bowl, and nightmares return to fill it with a weird and paralysing soup. I recognise the Buggenhout sculpture as a set-piece from a recurring nightmare I had as a child. I’m trapped amongst shifting piles of twisted metal. The piles grate together, slick with water and oil. Suddenly, I am sitting in a cinema watching a large count-down on the screen. The numbers tower, white and flickering. God’s voice booms, reading the numbers as they flash before me. And that’s it. It sounds relatively innocuous now that I read it back, but then again, the real terror of a dream doesn’t often lie in its literality or immediate appearance. Maybe it’s narcissistic for me to recognise a part of my own dream in The Blind Leading the Blind. It’s creepy too. It’s as if Buggenhout knows what is in my own skull.

Luke works in the MONA Gift Shop, say 'hello' if you see him. This neurotic and talented lad aspires to be an editor, or writer, or PhD student, whichever comes first. He also has an overwhelming addiction to books. The Blog Mistress sometimes wonders if his eventual demise will be a result of being crushed under a teetering pile of tomes in a New York apartment. Fated to be a potential tale on a show such as A Life of Grime New York. A highly underrated show, frankly.

P.S. Here lies the story of Jim. Reader, beware; it does not end nicely.

There was a Boy whose name was Jim;
His Friends were very good to him.
They gave him Tea, and Cakes, and Jam,
And slices of delicious Ham,
And Chocolate with pink inside
And little Tricycles to ride,
And read him Stories through and through,
And even took him to the Zoo—
But there it was the dreadful Fate
Befell him, which I now relate.

You know—or at least you ought to know,
For I have often told you so—
That Children never are allowed
To leave their Nurses in a Crowd;
Now this was Jim’s especial Foible,
He ran away when he was able,
And on this inauspicious day
He slipped his hand and ran away!

He hadn’t gone a yard when—Bang!
With open Jaws, a lion sprang,
And hungrily began to eat
The Boy: beginning at his feet.
Now, just imagine how it feels
When first your toes and then your heels,
And then by gradual degrees,
Your shins and ankles, calves and knees,
Are slowly eaten, bit by bit.
No wonder Jim detested it!
No wonder that he shouted 'Hi!'

The Honest Keeper heard his cry,
Though very fat he almost ran
To help the little gentleman.
'Ponto!' he ordered as he came
(For Ponto was the Lion’s name),
'Ponto!' he cried, with angry Frown,
'Let go, Sir! Down, Sir! Put it down!'
The Lion made a sudden stop,
He let the Dainty Morsel drop,
And slunk reluctant to his Cage,
Snarling with Disappointed Rage.
But when he bent him over Jim,
The Honest Keeper’s Eyes were dim.
The Lion having reached his Head,
The Miserable Boy was dead!

When Nurse informed his Parents, they
Were more Concerned than I can say:—
His Mother, as She dried her eyes,
Said, 'Well—it gives me no surprise,
He would not do as he was told!'
His Father, who was self-controlled,
Bade all the children round attend
To James’s miserable end,
And always keep a-hold of Nurse
For fear of finding something worse.

It all comes back to wolves, doesn't it. My recurring childhood nightmare was about being chased by wolves. And those giant wombat and kangaroo-like creatures at TMAG, don't even get me started on those... I think it might be out of proportion animals in general for me.