Hand-jobs in the post-humanist age

1. To adorn unnecessarily something already beautiful.
2. To make superfluous additions to what is already complete.
—thefreedictionary.com

On Saturday a man who is much cleverer than me asked what angle he should take in his write-up of our exhibition, Theatre of the World. The exhibition opened on Friday. Actually, it opened on Saturday, but the party was on Friday. I didn’t enjoy the party until near the end because there were too many people I knew in one place. I find it very difficult to remember how everyone relates to each other, and what sorts of things are acceptable to talk about in each situation. For instance, two of my good friends standing on either side of me who don’t really know each other: my in-jokes and way of interacting is totally different for each and I have to think, on the spot, under pressure, not only what their names are so I can introduce them but what conversation topics will be relevant to them both. Really the problem is having to mobilise discrete parts of my personality at once. I don’t understand people who are the same in every context, ‘She’s always herself’; how do people know this of each other, anyway? I refuse to accept that this means I’m inauthentic or dishonest with myself: I quite simply feel differently around some people compared to others. With Anica, puns are funny, but not with Simon. With David, it’s perfectly permissible to express opinions on other people’s undertakings using violent terminology like ‘kill’, ‘bullet’, ‘appalling’, ‘horrific’; Amy’s company makes me sense the inherent value in people’s creative pursuits, regardless of the quality of the output. With Kate (I promise this is the last comparison) I have high expectations of myself; Corinne makes me like my frailties. The other reason I wasn’t having fun was that my feet were hurting. That concrete is really effing hard on heels.

So at lunch, at The Source, the clever man asked me his question, and I answered him, and thought I should probably think about it a bit more and write it down, so that’s what this is.

The angle I would take is:

Notably, my boyfriend (sitting on the other side of me) commented after my pitch to the clever man that I was ‘gilding a lily’. For him, humanism is not a threatening notion; the ‘post’, and its attendant chat, is an unnecessary adornment (I already knew this though because he likes to build things and I prefer to take them apart i.e. he studied architecture and I studied arts. I also knew it because his eyeballs make a grinding noise when he rolls them).

The truth is – I’m actually kind of sorry about the ‘post-humanist’ bit. 1 I don’t want to use an academic-sounding word, really, because I have enough respect for academia to know that I am therefore obliged to spend a lot of my energy discussing my terminology, and to lose my reader in the process. Nobody reads academic texts except other academics, and that means hardly anyone benefits from them, and the texts themselves benefit from hardly anyone’s influence, just a small circle of people with obscure and special knowledge. 2

I’m talking about our concept of ‘the human’. The reason I’m suggesting it’s ‘post’ (which doesn’t mean ‘coming after’ so much as ‘in response to’, or ‘in reaction against’) is because just normal ‘human’ without the ‘post’ took a thorough beating in the second half of the twentieth century. As it should have. ‘Human’ seems inclusive, but actually it’s not, because it hinges on a standard and a type. Simply put, ‘human’ implicitly means a white man, and probably a pretty good-looking white man, and certainly not one that likes other good-looking men. He, that man (and of course I’m simplifying, ‘stylising’) was the standard against which other modes of humanity were measured. Darwinism was appropriated (inappropriately) for this cause: it was used to buttress the myth that humanity existed on a continuum of progress, at which degenerate types like Africans and Tasmanians represented the lowest ebb of human development. The Tasmanian bit is not a joke: according to nineteenth-century social Darwinist discourse the Tasmanian Aborigine was the lowest rung of evolutionary development. 3 Similarly, women – especially those who embodied an inappropriate or threatening form of femininity, like if they have a moustache or are wildly unimpressed by penises – have fought hard for admission to the human race. In my humble opinion, they’ve (we’ve) at least got our foot in the door. Privileged women like me are all the way through. On the other hand, Australian Aborigines only officially became people in 1967. We have a long way to go before Aboriginal becomes synonymous with human.

Nevertheless, the twentieth century’s fracturing of empires – imperial, sexual, ideological – gave birth to a kingless world of diffuse and relativised power. I will use my eye-rolling, skyscraper-dreaming boyfriend as an example. He is a bona fide WASP (bless him). 4 But he’s also a separated father. He’s a majority in the workplace, and at the ping-pong table (no one plays golf anymore); decidedly a minority when he takes his kids to school, and in the realm of family law. In this world, where minority and majority fuck around with each other a lot, 5 we don’t have to fight so hard to assert our differences, because we take those differences for granted. Of course many people don’t respect difference, but I’m talking about our dominant, collective cultural identity – according to which, overtly racist and sexist people are the deviant ones.

I argue that we can think in terms of ‘human’ again, because we’ve done the work required to break down the sexist, racist and homophobic implications of that term. It is only from this perspective – both fractured and inclusive – that we can sift though for some common human truths. 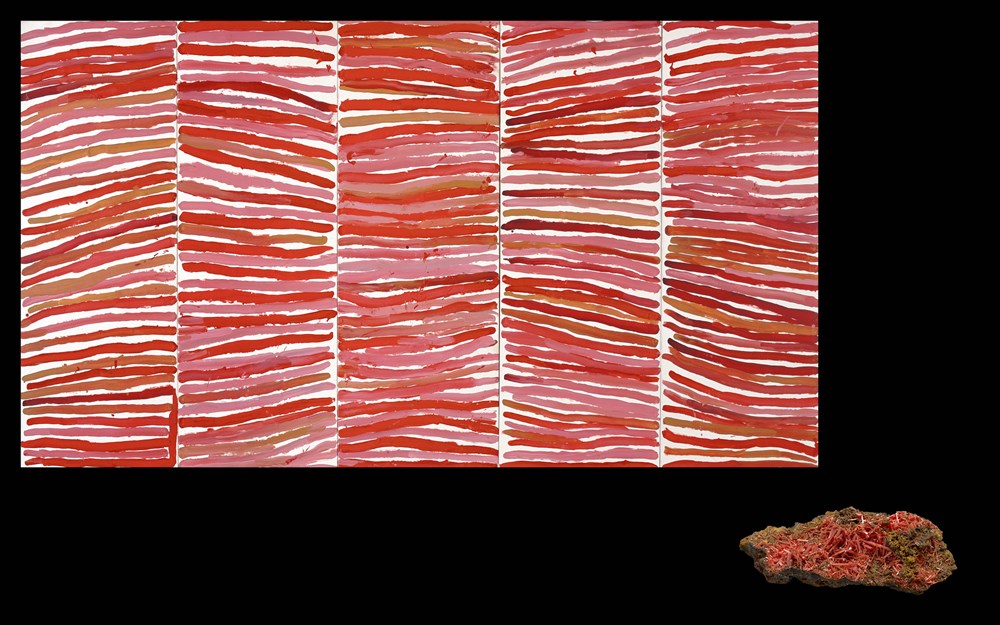 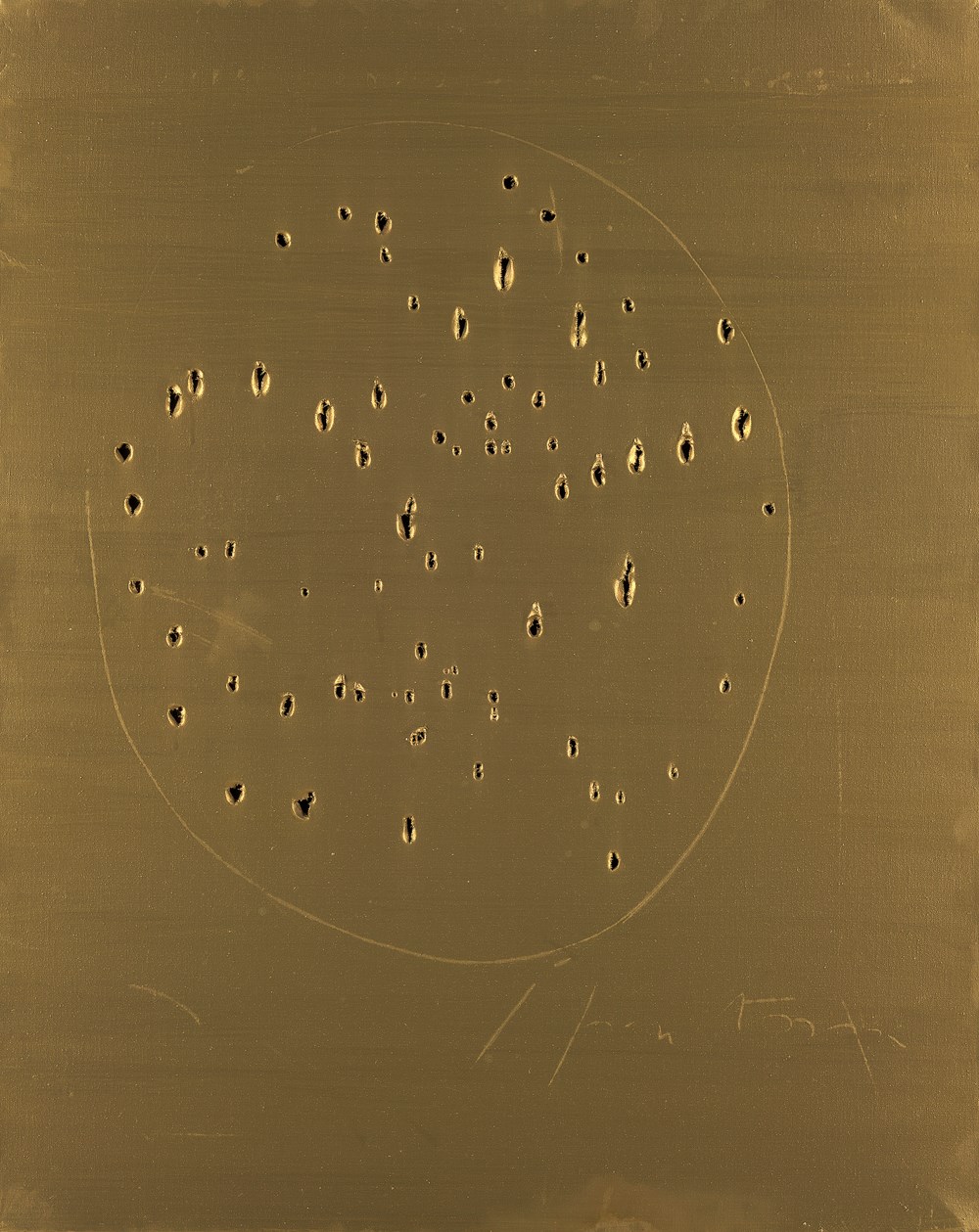 Art, arguably, manifests such ‘fractures’ aesthetically. And Theatre of the World gathers them together. I find the idea a little outrageous. It raises my postcolonial hackles. Placing a line-painting by Aboriginal artist Emily Kame Kngwarreye alongside a European modern master like Lucio Fontana reeks of primitivism. Primitivism is one of the vehicles of the exclusive form of humanism I outlined above: the one in which non-European peoples represent an earlier, more idealized stage of human development. ‘See?’ The pairing of Fontana and Kngwarreye might (possibly) say. ‘We’re all the same’. And with this, the realities of the inequality faced by Aboriginal people slides out of focus, as does the very different way Aboriginal art operates within our commercial and cultural economy.

Except this doesn’t happen, I don’t think, in Theatre of the World, and part of the reason is that we’re ready, collectively, to think about how two artists like Fontana and Kngwarreye might be compelled by comparable human motives, each enmeshed as they are in a complex matrix of personal, social and historical forces. We’re ready to see them both as both radically unique, and shockingly the same.

Maybe. I’m pretty sure my favourite WASP chimed in at this point, charmingly, with his gilded lily.

The other thing the clever man asked me, at the party this is, on Friday night: how come no one talks about sexual technique anymore? Indeed, it’s all about self-esteem, connection, maintaining a work-life-sex balance; what to do if your boyfriend compares your labia to Wiener schnitzel (or any other crumbed meat product). 6 Take this example from the sex column in The Age.

Q. After we've done the family thing in the morning, my husband and I plan to spend Christmas Day in bed, awake! Can you recommend some sexy gifts we can unwrap together?

Massive cares. This is a sex advice column? What about, ‘How do you give a good hand job?’

Which is precisely the knowledge contributed by my friend’s ‘shy’, cherub-faced girlfriend who, joining in the conversation with the clever man and myself at the party, informed us that the appropriate manner in which to manually stimulate one’s partner’s penis is to the beat of ‘Wangaratta’, where the hard syllables correspond to the up and down strokes respectively:

And so forth. I added the exclamation marks myself.

That’s that then. Not much left to say, really, except perhaps to come up with some other place names, perhaps some relevant to us Tasmanians. Ouse? 7 Sorry. My WASP will be horrified.

1 Although, without it, my angle would just be ‘Art’ and that’s a bit general.

3I first encountered this argument in Anne McClintock’s Imperial Leather: race, gender and sexuality in the colonial contest; I was reminded of it rather powerfully more recently, when the Brisbane-based artist Vernon Ah Kee told me of the way he and other Aboriginal people are taught not to ‘reach for an upper rung, let alone to grasp it’. You can see Ah Kee’s work in Theatre of the World.

4 He comes from the sort of family that produces senators and architects; the sort that gets the kids skiing early so it comes easy to them later on. I never learned to ski: my leisure time as a kid was taken up with watching my mother’s bulimic, ‘singing deck-hand’ boyfriend perform ‘Under the boardwalk’ for the weekend harbor-cruise  passengers. She kicked him out eventually, after he stole her watch; her parting advice was to ‘skip the middle bit, and throw the food straight down the toilet’. Happily, I inherited my mother’s sense of sarcasm and not her taste in men.

5 This idea is taken (and bastardised) from Ken Gelder and Jane M Jacobs’ Uncanny Australia: sacredness and identity in a postcolonial nation.

6 From Marie Claire magazine, February 2009: ‘I was already feeling slightly body conscious when he reached down and put his hands between my legs and suddenly started laughing. “Wow!” he exclaimed, as he tugged on my inner labia. “You’ve got a couple of Wiener schnitzels here!”’

7 Say it ‘Ooze’ (for non-Tassies). Also – please note that the correct pronunciation of Launceston is LON-ceston.

Love it. And rest assured, techniques a plenty can still be found here...! Curiosity is not just a human quality.
http://klawclub.com/the-art-of-the-blow-job/

More blogs from Elizabeth for the O Devices! Brilliant spiel - hope your feet feel better from the big party x. :)