This worm bears the face of its creator, Jan Fabre. What the worm says is: ‘I want to draw my head out of the hangman’s rope of history’. He says it in Flemish, because the artist is from, um, Belgium. He’s a bit of an artist rock star, making major works for biennales and staging sell-out shows at the Queen Elizabeth Hall in London, that sort of thing. 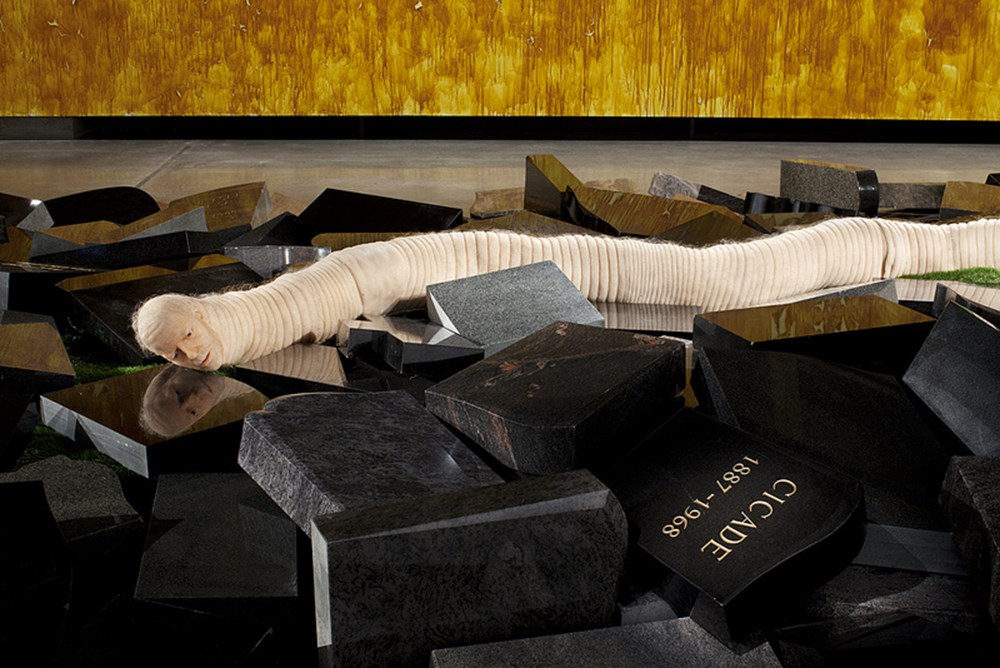 I saw a work of his at the Venice Biennale (I just want to say: that sounds really snazzy, and part of me rejoices that I’m so lucky to have been to Venice as part of my job, but another part remembers that I was intensely lonely at that particular time, and found traipsing around the obviously incredible, amazing etc. Venice on my own, in the shoulder season, abjectly depressing). Fabre’s work was out in the boat-building part of town, called the ‘arsenale’ (hot and dusty. I went back to Venice two years later with my boyfriend, and with David and Kirsha – a far pleasanter trip, although my boyfriend and I did have a massive argument, or rather, I sulked in a very energetic manner, because at dinner one night David had commented that he found Brazilian-waxed women ‘hot’ and my boyfriend agreed with him, and I was mortally offended because I find the whole thing a form of casual self-torture that everyone seems to be participating in except me 1; but more than that, I took it as a form of personal rejection, basically his way of saying, ‘Haven’t you realised by now I find you repulsive’. It was early in our relationship and perhaps, in hindsight, I was being a little sensitive. Anyway, on this far-pleasanter trip to Venice my boyfriend took photos wildly of the arsenale, the big cranes and chains and docks and stuff like that. I guess he was imagining the hub of empire. I was thinking more about Shakespeare). So the Jan Fabre work that I saw (this is the lonely trip now, the first) was encased in a large closed-in space around which the visitor walks via a sort of elevated, wrap-around viewing platform. You look down into this pit-like mound of dirt or soil or something, where a silicone replica of the artist stands digging into an oversized – perhaps, Nissan Micra-sized – replica of his own head. So it’s a big Jan head, over which a normal-size Jan stands and digs with a shovel. Parts of his big brains are exposed. 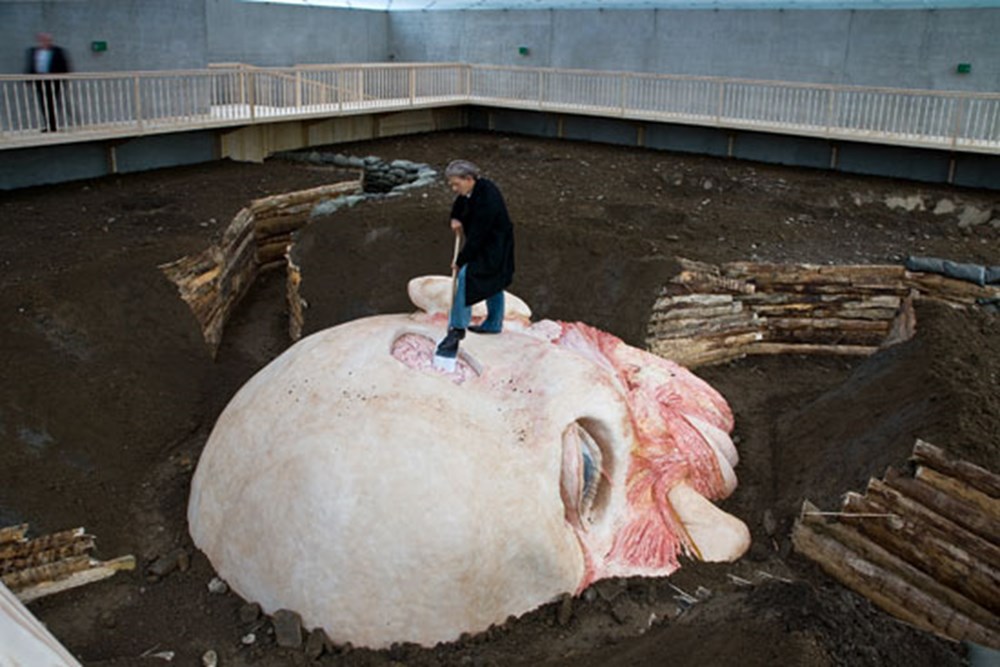 What I’m trying to say is that this artist is pretty interested in excavating his own mortality. It’s a back-handed form of massive-egoism: an artist like Jeff Gabel – whose work flanks the worm in our gallery – isn’t obsessed with his own insignificance because it comes as less of a shock. It’s less of an affront, or insult to his intelligence. I’m siding with Jan here. I get weak-kneed shock each time I think about the fact that I’m going to one day not exist, but I’ve banged on about that enough by now. Maybe one day, the thought will begin to bore me. As an aside: Vladimir Nabokov’s autobiography, which I read (some of) in preparation for writing some marketing material for our concert Synaesthesia (Nabokov was a synaesthete) begins like this:

The cradle rocks above an abyss, and common sense tells us that our existence is but a brief crack of light between two eternities of darkness.

See also: ‘They give birth astride of a grave, the light gleams an instant, then it’s night once more…’ – Becket, Godot. Nabokov continues:

Although the two are identical twins, man, as a rule, views the prenatal abyss with more calm than the one he is heading for (at some forty-five hundred heartbeats an hour). I know, however, of a young chronophobiac who experienced something like panic when looking for the first time at homemade movies that had been taken a few weeks before his birth. He saw a world that was practically unchanged – the same house, the same people – and then realized that he did not exist there at all and that nobody mourned his absence. He caught a glimpse of his mother waving from an upstairs window, and that unfamiliar gesture disturbed him, as if it were some mysterious farewell.

Anyhow, the additional factor, of course, is that this worm work is not just about mortality, but about art and its history. Jan knows he is but a worm before the greats of European culture, whose names are emblazed (via some sort of entomological code) on the tombstones over which the worm debases himself (ok, that was a little dramatic, but still). Like all great egoists, this artist knows his place and is horrified.

I have felt some sort of Shakespearean reference agitating at the edges of my memory in relation to that work; if that sounds a little pretentious, perhaps you’ll like me more if I tell you the reference finally emerged (as in, just then, as I wrote the last paragraph) via my memory of a scene in a cemetery from the Steve Martin film LA Story (it’s got Sarah Jessica Parker in it and it’s brilliant). In this scene, the guy from Honey I Shrunk the Kids is grave-digging, and the actor playing Steve Martin’s love interest starts quoting Hamlet:

A fellow of infinite jest…
He hath borne me on his back a thousand times.
Where be your gibes now?
Your flashes of merriment that were wont to set the table on a roar?

I think what I’m saying is that Jan Fabre, like Steve Martin and everyone else, knows everything is shit compared to Shakespeare. Except maybe Nabokov.

The other encounter I had with Jan Fabre (other than when I interviewed him and he told me he felt sorry for the people who had to listen to my interviews, no joke) was when Olivier, Mona curator, took me to one of his said shows at Queen Elizabeth Hall, called ‘Orgy of tolerance’. It was during my first term as a Mona employee, and Olivier hadn’t quite worked out whether I had been sent to London as ‘a spy’. He took me to the show and I didn’t like it at all, although everyone else sure did. There was an extended group masturbation scene that transposes polite conversation with flagrant flogging of logs and so forth, which everyone but me found uproariously funny. Anyway it turns out Olivier was angling to bring the show to Tasmania for Mona Foma, and my reply to an email question from David – ‘Did you like the Jan Fabre show?’ – that no, I didn’t, I thought it was tacky and unfunny, contributed somewhat to David’s decision to can it. Olivier didn’t speak to me for a week. But when he did, his rage scorched my eyelashes. As it turns out I think David would probably have loved the Fabre show: he loves Balletlab, which similarly, I can’t stand.

One of the things Fabre said to me in the I-feel-sorry-for-your-listeners interview was that he believed in the ‘sacred bond’ between artist and viewer. He ‘trusts the public’, he says, to interpret his message and appreciate his creation, which we should not ‘dirty too much’ with our comments and interpretation. Whoops.

1 ‘But absolutely everybody gets Brazilians’ - My beautician, the other day.

I read as many 'great' autobiographies as I could, and Nabokov's stood out because it was the only one out of many (many!) that depicted a happy, fulfilled childhood. A life almost without complaint. I got the feeling that there was more potential for imagination with his darkness, because it was, largely, abstract. Never actually experienced.
Also, as an aside, I also do not get Brazilian waxes... but I did get some interesting insight from a Brazilian waxer recently: http://klawclub.com/5-things/

I must admit I didn't get through the whole thing. I find his writing almost too good to tolerate. It wears me out having to marvel at the exquisite expression of every bloody sentence. Plus, it just makes me feel like there's no point writing anything - better to dedicate my life to reading the books that already exist (probably not a bad plan regardless). Your thoughts on his 'abstract darkness' are illuminating: I still don't know whether there's truth to the adage that pain generates better art.

"Plus, it just makes me feel like there’s no point writing anything"
All good authors make me feel this way! I guess I'm just a sucker for punishment - who knows, maybe it'll mean I'll make better art from the pain of it!

Nice piece Elizabeth. Don't fret about this brazilian fad - the wax will wane.

If I have one criticism of MONA (albeit a small one in the context of the whole thang) it is that among eros and thanatos I sometimes wonder where is the love? While provocation is great to rattle the cages of the mostly ultraconservative Australian art scene, and the shock value challenges audiences to open their minds to new experiences and ways of thinking, to do so as raison d'etre one runs the risk of becoming the Alan Jones of the art world. (that's arsehole Alan, not erotic Allen BTW). My belief is that ones love of art should always be greater than ones love of oneself.
Which brings me to Jan Fabre's big head. Seems like there is something of an epidemic of this lately. I know Chuck Close did it way back when and Ron Mueck has had his go, but I have recently seen Sam Jinks (he also does silicon figures about 4 foot tall), humbly place his much larger than life self-portrait at the entrance to his show at the Shepparton Art Museum. Locally on the far south coast of NSW a bright young thing who shall remain nameless also humbly decorates his coffee shop come gallery with huge canvasses of himself. Let us hope that an antidote can be found soon...
But back to Jan. He is a big name, has all the credentials, produced great work, sure, but his comment on the 'sacred bond' seems at odds with works like the big head, and the worm. Artists have a responsibility to their audience, and part of that is to not insult their intelligence (or their passion for, and knowledge of, art).
I am sorry Elizabeth, with all due respect, I don't care what the boyfriend thinks, I think the 'brazillian' thing just a product of the cliched world of American porn and can't see how it adds to our understanding of art, and references to Hollywood movies in this and the last post are testing my patience! I expect more from MONA...let the love of art shine through and leave the egoists to ponder their future in front of their tarnished mirrors...

PS I think that one of the most 'shocking' works in MONA's collection is Hans Bellmer's 'The Doll'. I note that it also one of the smallest...

'My belief is that ones love of art should always be greater than ones love of oneself.' - A noble pursuit. Best of luck with it.

Roland Barthes killed of the Author years ago (in the 80s perhaps?), and I suspect that he knocked off the Artist around the same time, in a bloodbath of self-important concepts. Sure, "love of art" sounds lovely (in a conservative, pearl-wearing, kind of way), but it also sounds prescriptive, debate-ending and boring. So go ahead. Love your art. But I won't be having a drink with you.

Awww Luke, no need to descend to personal insult. I was simply making the point that provocation for the sake of provocation ultimately becomes the very conservatism that you dismiss (hence the Alan Jones reference). And perhaps I should have added that most of Elizabeth's writing I find very good, and a refreshing change in the plethora of art wank that exists today...

I would just like some more intellectual content and scholarship to balance the desire to be hip...