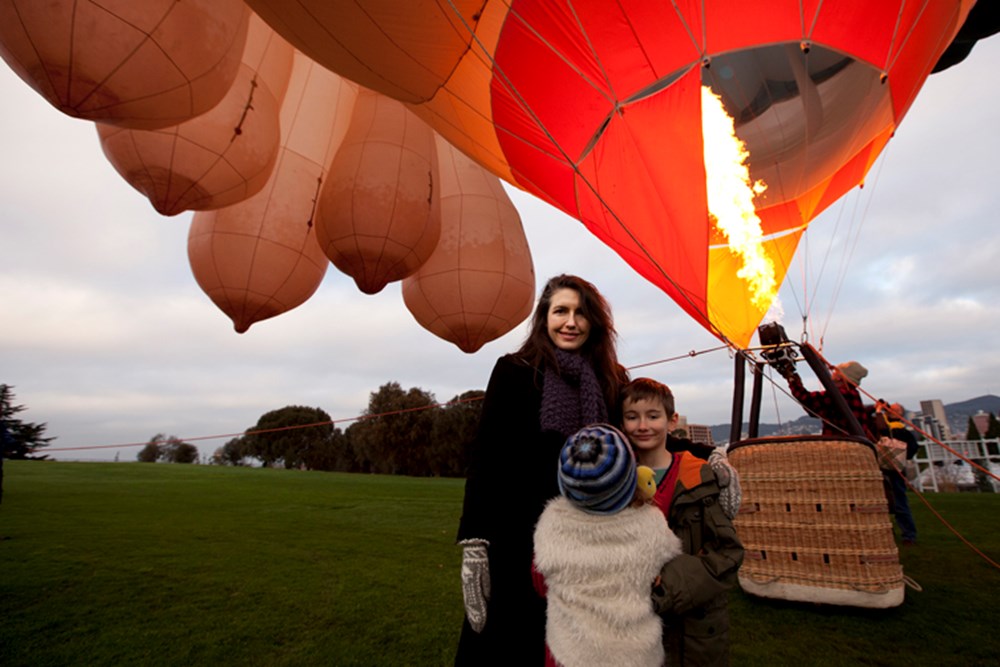 Patricia Piccinini with her children.

Elizabeth Pearce:
25 years ago, when you first went to art school, what did you think you were getting yourself into? Did you have a clear objective?

Patricia Piccinini:
Twenty-five years ago I thought that I was going to drink red wine and have a studio and walk around with flowing dresses on with a canvas under my arm. That’s what I thought being an artist was back then. Then I went to university to study art history and economic history, and then to art school. When I left art school I realised that painting wasn’t the best way to express the ideas I was interested in – it seemed anachronistic. I was, and still am, really interested in ways of seeing the body. My husband, who was studying architecture, said to me, ‘You can just work with other people’. He was used to the idea of working with other people – architects don’t go out and build buildings, they work with a myriad of people to create something. I thought, ‘Yeah, I can do that. I can work in the world of ideas,’ which was what attracted me to the art world in the first place.

EP: What kind of experience do you want to offer your viewer?

PP: When I see an artwork I am looking for something that moves me or challenges my ideas about the world. That’s what I hope The Skywhale offers people. What I'm interested in doing with my work is putting forward these propositions. Often they have a strong narrative. I put them out into the world and see what sort of discussion they generate. I certainly don’t try to shock people – and actually, I am shocked myself when people are shocked. I don’t know why anyone would find The Skywhale offensive or ugly. To me, she's a figure of wonder. She's also got all these ways into her as an idea, which I feel that people can connect with. On one level, this work is my reflection on the sublime quality of nature. On another level, she is sort of a test. She is this being that I offer to the public to see if they can embrace her or not. It’s a challenge to the viewer’s ability to accept something strange. All my creatures are quite vulnerable like that.

EP: Are you expressing your own vulnerability through these creatures?

PP: I feel that I am incredibly vulnerable because I really deeply care about them. I could tell you about each one, where it comes from, what it's trying to say. I think a lot of what they're trying to say is really relevant to the times we live in.

PP: It's about how we consider nature, which is crucial at this point, but looking at it from the point of view of how we imagine our relationship with nature and with other creatures. The idea that nature is only important if it is useful to us is a very strong one, which suggests a biblical sort of power structure with us at the top with ‘dominion over the birds’ and that sort of thing.1 It also translates as how we relate to other people – our xenophobia that reacts so strongly to any sort of difference.

PP: I'm not going to make a work that's saying, ‘You're the culprit, you white man in your business suit raping the land…’ I wouldn't want to make a dogmatic piece telling people what to think, because I also know that everyone benefits from what we're doing to the environment. I don’t exclude myself from that. The issues are so complex and contradictory. Even the fight against climate change has an element of self-interest. What I do think is that it has to be discussed in a way that people can connect with and that allows them to generate their own answers. Being in the art world's pretty interesting because people expect artists to be very wise and their work to be ‘true’. It is very difficult to be ‘true’, so being obscure is often the next best thing. I've actually been criticised for my work being too accessible.

EP: Maybe some people get confused between popularity and cheapness.

PP: I agree, or they think that work must be obscure in order to be serious. I'd like to think that my work offers more beneath the obvious visual narratives, but if all they take away from it is a feeling, then I am ok with that. What I don’t want is for them to just shrug and walk away from it without thinking. The Skywhale was a commission, essentially a public sculpture, so I felt I had an obligation to make an object that people could really connect with. When I go to an art gallery I want to be moved. I actually want to experience something. I want to think. I want my life to be somehow different when I leave. I don’t always get that when I go to art galleries, and when I do I really value it.

EP: Do you think your own work offers that experience?

PP: I don’t know. It’s not for me to say. But it’s definitely one of my aims. When it came to The Skywhale, one of the difficulties was using a medium that's generally associated with commercialism, because balloons are used as advertising. I had to overcome that association. It needed to be something where the balloon-ness was very much secondary, where it was a creature first. It had to be something that seemed almost conceivable – and conceivable at that scale, not something small blown up. Its movements needed to make a certain sense.

EP: I like the fact that there's an element of harnessing nature’s power, but in a child-like way. It's hopeful. For the commemoration of the centenary of Canberra, I would expect something harder, more static and monolithic. But The Skywhale is the opposite of that – it’s gentle and maternal.

PP: When [Creative Director] Robyn Archer said, ‘Make me a balloon,’ I said, ‘I'll do it, but it has to be part of my practice. It has to be something that's integral to the rest of what I do. I can't just make you a Walter Burley Griffin head.’ And to her credit, she said yes. Really, the work is about the wonder of nature. Which sounds a bit naff I know, but every time you come in contact with nature there is something there that is wonderful. We know that whales, these seagoing mammals, came from the sea, and then became these hoofed mammals, and then went back into the sea and grew enormous and intelligent. They swim deep under the water and even suckle their young down there. Is that path any more unlikely than them having evolved to fly, or staying on the land? Their adaptability is the wondrous thing, as is our own. I’d like people to look up at her and wonder about these things. But some people just see her mammaries, and it seems to freak them out.

EP: Yes, a lot of the response has centred around her bosoms. Why did you include them and why do you think they’ve been such a talking point?

PP: I included them because I wanted a benign, maternal figure. All female mammals have breasts, that’s why they’re called mammals. How could I leave them out – it would be weird. I certainly never imagined they would be such an issue.

EP: Do you think people have reacted like that because we have an idea of what breasts look like – they look a lot perkier than the Whale’s, and there's only two of them?

PP: Lots of creatures have multiple nipples. It's confounding for me because I just think it looks beautiful and I know it would be really functional. But apparently breasts on animals is not the stuff of art. It’s becoming increasingly easy to be disconnected from your bodily functions and to objectify the body, especially a woman's body – and I haven't even made a woman's body! I think it’s worrying.

EP: Have you been hurt by some of the things that people have said?

PP: At times I’ve been appalled at people's vulgarity. I think, ‘Wow, that's really base’. But I see that as a reflection of them, not of my work.

EP: Are you talking about the political element? I've got a quote here from ACT Leader of the Opposition Jeremy Hanson, who says, ‘I really don’t know whether to laugh or cry. It's an embarrassing indulgence only a fourth term government would contemplate.’

PP: No, that’s a different issue. I'm talking about the sorts of comments that you see at the end of articles or videos online – stupid stuff about tits or whatever. On the other hand, some of the stuff is actually quite funny. Who can’t laugh when terms like ‘Hindenboob’ get used in Parliament. I mean, it’s ridiculous. However, much of the political opposition – like from Jeremy Hanson, who I don’t even know – is not about my work. They’re using my work as leverage. The arts are always a soft target. On the other side of that, there was something in Wired a few weeks back – the comments section started with the usual ‘It’s too weird, check out the boobs’ crap, but was followed by three paragraphs of reasoned defence by some other anonymous poster. That’s what makes my day – that someone wanted to take the time to come to her defence.

EP: The Whale is a meme now, a unit of cultural meaning.

PP: Yeah, exactly. [On Twitter the other day] someone said about the Eurovision contest: ‘This is boring. It needs more Skywhale.’ So she’s become a thing in her own right, beyond my control.

Unfortunately the general Australian public is so unsophisticated.... we still have problems accepting breast feeding in public for goodness sakes! Women should be seen (but not their boobs, well at least not in a functional way) and not heard... :-/

'The arts is always a soft target.'