Useless as tits on a bull

So the Skywhale has gone viral. (Let’s all say it together now: hashtag Skywhale! Yet again, the Twittersphere has doled out some sort of bastardised and populist cultural legitimacy, in a move that is equally liberating and terrifying. I don’t understand Twitter. For me, it’s in the same category as Sydney, Bob Katter and quinoa.) Gossip about Patricia Piccinini’s government-commissioned work has become contagious; it’s airborne, both figuratively (the goss) and literally (the art). And now this titted behemoth has arrived in Hobart, swinging mammaries and all that delicious confusion (‘I thought they were penises,’ said Mum. Thank you, Mother, for that screaming Freudian subtext). Which is kind of the point, isn’t it? Because it isn’t just chit-chat, this inescapable talk (whether positive, negative or ambivalent); it’s indicative that this artwork has taken that perplexing leap from the tired category of art into the bustling cultural imaginary. And on a national scale too; it was commissioned by the ACT government to commemorate the centenary of the nation’s capital, Canberra. Christ knows what the connection is. Best not to tug on that thread too strongly. (And really, who cares anyway?) Regardless, with all this questioning and bafflement, we’ve all come together to suckle, so to speak, at the teats of the Skywhale, and who can say what her nourishing milk will provide? 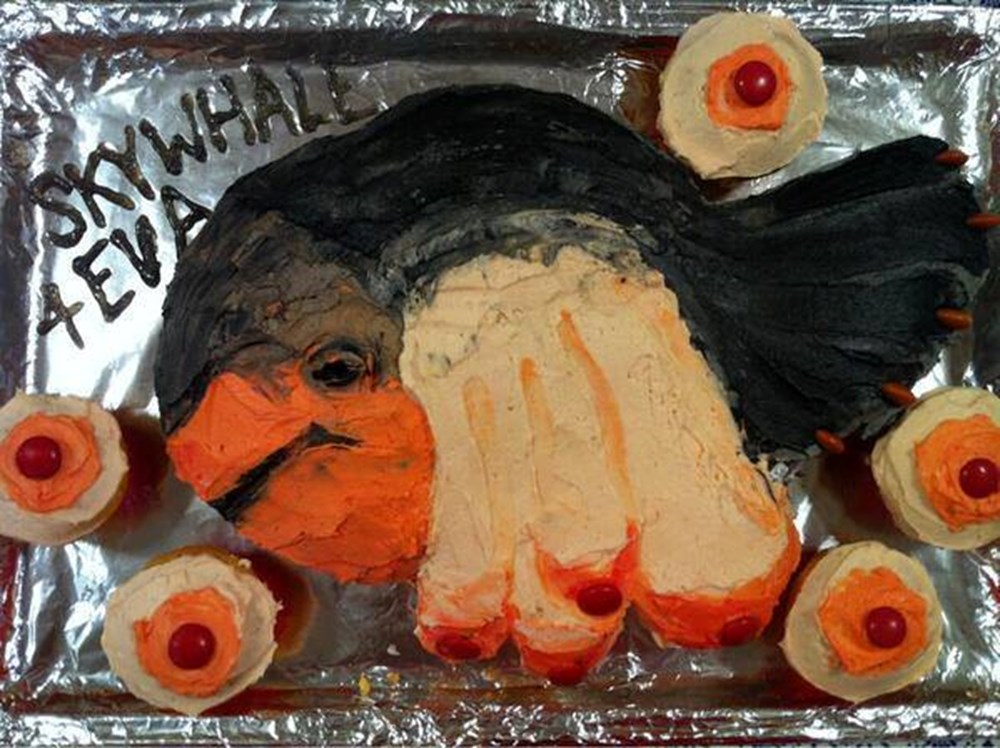 For me, it’s this hyperbolic expression of the shock of reference, between my present experience and whatever my brain idiosyncratically connects to that particular moment. The other night I was walking home up the hill, scarf-muffled and icy-fingered, when the breeze changed and something, the shift in scent and temperature perhaps, took me back, immediately and violently, to dusk in London. I was floored by it, inexplicably upset. Bounded by circumstances and shocked to realise so. It was really self-indulgent.

I’ve written previously on this blog about my reaction to a lecture given by Ellen Dissanayake about the evolutionary origins of art. (Her thesis, in a nutshell: that the behaviour of making art plays a part in better-adapting humans to their environment. Those groups and individuals who practice what Dissanayake calls ‘making special’— of which art is an important element—are better placed to survive and procreate than those who do not.) Overall, it (my argument) wasn’t great; I got a bit ranty and tangential. A few days after it was posted, someone asked me if the main reason I had a problem with the lecture (note: I had many problems with it) was because I may not procreate, that I may not participate, genetically, in the perpetuation of the human species. She was worried about offending me; she didn’t: I’d been wondering the same thing myself, in much less obvious terms—the ‘X because of Y’ phrasing made it sound petty and hard line. As a gay guy1, I keep revisiting this angst-y existential dilemma of not wanting to be, or end up as2, a genetic cul-de-sac.3 Sexuality is relevant to this discussion, although I’m not sure to what degree of relevance it can or should lay claim. In the context of popular reproductive politics, it certainly goes some way to explaining the increased use of the derogatory term ‘breeder’, where reproductive propensity is mobilised primarily against a heterosexual middle class. Note the term’s mocking gesture to animal husbandry (thanks, Urban Dictionary).

I get confused, though, wondering if my angst has a genetic undercurrent. In other words, apart from wanting kids for the conventional reasons, both immediate and distant (family, warm fuzzies, minions obliged to take care of you in your dotage), I’m unsure if this angst is also indicative of a subconscious burning need to pass on my genetic material. Currently, I don’t care about the means by which I could potentially have children (two of my nearest and dearest have offered me rental of their wombs—what do you do, pay by mileage?—it’s all so sci-fi). There are obviously innumerable reasons why people choose to have children in the ways that they do, and I would rail against any kind of artificially imposed hierarchy of the best ways to do so. ‘Naturally’ always seems to come up trumps, with its attendant cultural value offering a swift kick to the teeth of many.

And this is another reason why my particular anxiety (re: becoming a genetic cul-de-sac) makes me uncomfortable: it doesn’t match the position I’ve reached logically and politically. This kind of genetically based anxiety is frequently dismissed, arguably because socially constructed experience has become far more culturally and politically trendy following the identity politics boom of the 70s, 80s and 90s; it seems like we might only just be emerging from that particular hangover now. Many of my friends have begun to talk, winsomely and often, of marriage and babies.4 Discussing my worries with friends, I’m often met with a general response of, ‘Don’t worry; you’ll have kids somehow.’ I’d like that ‘somehow’ qualified, thanks5. Is that too much to ask? I’m aware, too, that if my sisters have children, then some of the genetic material I share with them will be passed on to their offspring. (Game of Thrones obsessives take note: I make this point not in the manner of that blonde twit, Viserys Targaryen; ain’t nobody gonna mess with Daenerys, am I right?) Richard Dawkins writes about this in his book, River Out of Eden. He describes how

No pressure, sisters dearest, but you could be my genetic Get Out of Jail Free card. How else am I to deal with such doleful condemnation from a figurative deck of Chance or Community Chest? ‘Go to Jail. Do not pass Go. Do not collect two hundred babies.’

For better or worse, these worries have been taking up a lot of my time. I’m still wrangling with them, and I will for a while yet, trying to reconcile where and how to put this particular brand of anxiety to bed. A necessary and timely thought process, or just self-indulgent, emotional and intellectual hot air? It’s easy, sometimes, to feel like the only Skywhale in the village. Inflatable and vulnerable to puncture. An effectively empty sack, already delimited within its predetermined arc. Where is the grace in that?

1 For the record, I don’t want to become one of those people who begin every sentence with prefacing fragments such as, ‘Speaking as a gay man … ‘ or ‘Given my raging and all-consuming homosexual identity …’ It’s a behaviour too resonant with that of feminists. And mature-age students. But you need it as context. So let’s all cringe together, and move on.
2 Oh the oblique rhetoric of that foul thought experiment, where you imagine yourself hurtling irrevocably towards your own culminating point of being a productive, aspiring human being. ie. Must have this job, that salary, that partner and those kids before this particular date, or I will be, effectively, doomed. NO PRESSURE, OK. It’s the bildungsroman gone unashamedly and hysterically histrionic.
3 I’m paraphrasing Bernard from Black Books here. Side note and name drop: Dylan Moran really loves Sidney Nolan. He told me so.
A clarification: I’m not entering this discussion within the terms of infertility, which obviously poses its own particular issues to those it concerns. Or not; it would be a gross generalisation to assume a uniform response to any of these experiences. It’s the particularity that matters.
4 Yes, yes, I’m aware I’m entering familiar territory of the single twenty-something, but I’m curious: when do discussions of these kinds of topics become normal and to be expected? It’s a different kind of thought experiment and a perplexing one, because I’m often unsure how to participate.
5 By whom, I’m not actually sure. The stork? By me? Christ I hate being an adult sometimes. Perhaps those wonderful people who wrote Where Did I Come From and What’s Happening to Me? could pen a follow up, So You’re Worried About Ending Up as a Genetic Dead End?

So where was I ...straight girl. Bi-curious. Spent several years in celibate but rich relationship with gay man...yes we did and still do love each other. Approached by another dear gay friend to have child. Tempted. Years of being a feminist activist and unprepared to put up with all the heterosexual bullshit. But said no. Why, fuck knows. Had child thru casual liaison anyway - raised him on my own. Joy of my life. Did I do it to for some strange desire to perpetuate my DNA - no not that self-centred! I don't actually know - do any of us know why things happen in our lives? It does. It's meant to be. But the angst of doing it on my own is as strong as Spectra. He is my only child. he is alone. So DO IT! but there are so many beAutiful gay lesbian couples out there. Join with them, create a life - turkey baster works well - create a life with a village to care. Wish you well fine fella....we need your DNA.

Interesting article. It was just a bit too long.

Hindenboob made me deliriously happy to return to Australia. Now, onto your quandary. There are many ways that you can have children. It is a pretty normal event, even if the avenue taken to get there sometimes seems unnormal / unconventional. But give it time, you have a lot of it.