Now that we don’t have Lou

In the early 90s my endless search for technological satisfaction resulted in me adorning my stereo with a five CD changer, and it had a shuffle mode. It would occasionally play songs twice in a row, the programmer of its shuffle mode model having, presumably, used a die for a model, not a deck of cards. But that didn't matter much, I was happy to listen to songs from the Velvet Underground's Loaded – the one album that was perpetually on the CD player – over and over again.

Can that still be true, now that we don't have Lou?

On the same album he gave us some sage advice on how to pick up famous actors, advice more relevant today than ever. Just persevere with your obsession until the object of your desires is old and fat, then they'll be ‘Over the hill right... and looking for love’.

We never got Lou to a MOFO but we did get his Velvet Underground colleague, John Cale. He concluded a tremendous gig with a Velvets song, penned by Lou, the dark but potent Venus In Furs. A friend commented to me, with a tear in his eye, that he loved the new Hobart, because it reminded him of the old New York.

I am tired, I am weary
I could sleep for a thousand years
A thousand dreams that would awake me
Different colors made of tears

Among my favourite albums is the Lou and John Cale record Songs For Drella, wherein they dissect their relationship with Andy Warhol, and find themselves wanting.

And then I saw Lou
I'm so mad at him
Lou Reed got married and didn't invite me
I mean is it because he thought I'd bring too many people
I don't get it
Could have at least called
I mean he's doing so great
Why doesn't he call me?

There were many other albums and many other moments. A decade before, but still a late discovery, I played The Velvet Underground & Nico until my record player's fingers bled. It didn't make me a junkie, but I learned some of the attractions of dissolving.

In the end heroin, and alcohol, and being born over seventy years ago, killed him. About others I sometimes say it is tremendous good fortune to have the opportunity to die, because that means that one has had the tremendous good fortune to be born in the first place. Each of us has, among other things, enjoyed an unblemished ancestral record of at least 700,000,000 consecutive successful matings. So Lou was lucky to be born, and lucky to die. I'd like to thank all Lou's ancestors, the bacteria, and the fish, and the shrews, and his mother, for being horny, and for being attractive.

Lou Reed recorded a song about The Day John Kennedy Died. Some days we know we are going to remember, because our lives are inextricably bound to them. I'd better do something worthy today. 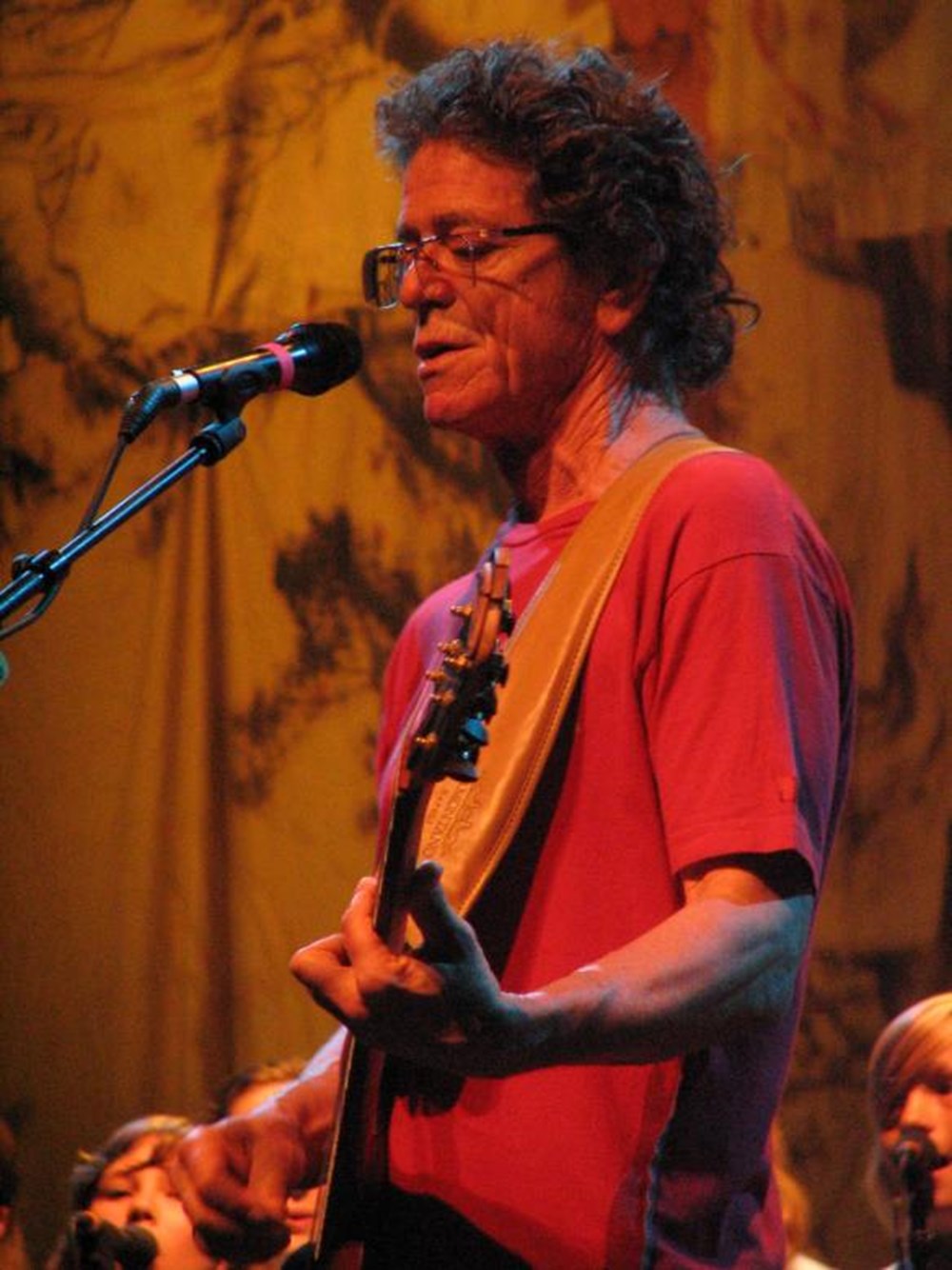 Lou Reed bought me a drink when I went to Max's Kansas City one night in the late 1970s when I went there with my friend the punk rock music critic and impresario Lester Bangs. Lester was one of Lou's greatest supporters and his biggest critical nemesis but in spite of themselves, they made history together out of a series of musical arguments in one of those epic NY underground love hate relationships that is much documented elsewhere. That night, Lou’s round of drinks was a kind of peace offering after yet another of their public spats. When we entered the room, Lou greeted us, or at least his old friend Lester with open arms, gracing me with a glimpse of typical warm NY public charm swiftly followed by polite dismissal. Lou called the waiter over, ordered our drinks then turned back to his table leaving us standing there holding our glasses of scotch behind him. I felt like pinching myself, me, a newly arrived young Tasmanian art history student drinking in the intoxicating air of one of my greatest musical heroes. I watched the back of Lou's neck for a few moments, inhaling a feint whiff of Old Spice soap that felt so familiar, like the aroma of awakening in the arms of a long lost lover. Then I heard Lester swearing before he strode off into the room. Lou should have asked him to join his table Lester felt, his snub was calculated. It was their world, I was merely a witness to yet another moment of the creative disillusion steadily mounting in the late 1970s among the NY underground cultural scene.
A decade later, I treated one of my wealthiest friends to Lou and John Cale's Songs for Drella concert at the Brooklyn Academy. At the time, I had no idea my friend was so damned rich because he lived in NY like an impoverished art student, never wearing socks even in winter and making most of his paintings directly onto the floor of his Beecker Street walk up apartment. To me, his outlook was the sign of another generation of artistic ideas adding a new layer into NY's endlessly shifting cultural evolution; fresh eyes alighting on a known landscape were bound to see it differently and inevitably playing a part in the perpetual reshaping the city's creative dynamism. Yet these newcomers had no particular fondness for the recent past and little patience with the incredible losses and quiet artistic triumphs causing so much change in New Yorkers' cultural lives during the 1980s. Perhaps the concert tickets was an attempt to re-orientate my impatient artist friend towards some of New York's most enduring cultural values, of the cycles of loss and renewal, of recovery recast as creative forgiveness even. The concert would turn out to be a momentary coinciding of a pair of unpredictable geniuses, it would also swiftly pass, they played a two night gig if I remember, neither of the stars had expected to survive the other. It was sublime, we were smitten with Reed and Cale's on stage improvisations, the sharp asides flew between them, the emotional tension crackled as they wrestled with unexpected new found harmonies on stage, more questioning than answering the status of their individual memories of Andy's incredible early influence on their destinies. Towards the end of the concert, just as we'd begun to expect Lou Reed and John Cale to begin smashing their instruments over one another's heads, they seemed to rediscover each other, the tension evaporated and for a moment, a fresh peace descended between them.

He was one of those rare poets who managed to maintain his art output even under narcosis. That junk gives you all the positives of suicide without the negatives, that you can lower your metabolism below the pain point for those moments that are too miserable/ unbearable, and the next morning you can get up and do it all again. just another little suicide.

Waking to the news Lou Reed had died, a mix of shock and sadness, as well as some wonderful adolescent memories discovering this crazy world we live in with his music as the predominant soundtrack. Thank you for the music sir, you were indeed one of the greatest. RIP

Beautifully written. And to Lou Reed: You made me forget myself, I thought I was someone else, someone good...

Lou would have loved MONA <3

I bought "Rock & Roll Animal" in my teens (quite some time ago now) and I still play it regularly on vinyl, my first but not last Lou Reed album, RIP ol boy

Good words David, I too was always waiting for you to get Lou down here!! Sad to imagine it cannot happen... I am tired I am weary-I could sleep for a thousand years...ohhhh I could melt into those lyrics. RIP Lou

Worthy to remember Lou's music .... Actually since I heard of Lou's death this morning I have had 'Perfect Day' song going around in my head all day - and that is weird given that I am in Ernabella in the APY Lands. So perfect song in a perfect place ... well to remember ...

Sadly missed but will never be forgotten in my life...most probably flying even higher on the wild side now, hey Lou. So enjoy reading your words David...hits a cord with me, live long and prosper bro...

Where ever the souls of people congregate after they leave this corporeal state; that 'place' is now richer because it has the soul of a true artist to add to the collective... and if newborn babies get their souls from the same place, one day soon, another artist will walk this earth and help us to better understand ourselves and the human condition.

I saw Lou Reed play at Alternative Nation in Brisbane 1995. He played solo but had L7 be the coloured girls singing the do de do's. He just played all his well known songs and had a great time. I sang along with Satellite of Love with my wife wondering why I knew all the words. He had a great run. I'm glad I got to see him and playing on the same day as Tool, Primus, Nine Inch Nails and PWEI. Perfect day.