Tessa Farmer’s The Depraved Pursuit of a Possum will be de-installed on Tuesday. The work is part of The Red Queen exhibition, which opened in June last year; it has taken me since then to find a way of putting into words Tessa’s startling, fun and funny way of looking at her role as an artist. It’s simple, really. She just tells a story. But the unique part, the part that makes it all so loveable, is the way she elides her role as the creator, watching the narrative unfold with the detached curiosity of any other bystander. In another artist, this might seem pretentious, a rhetorical trick to get attention. In Tessa, it’s a pleasure. 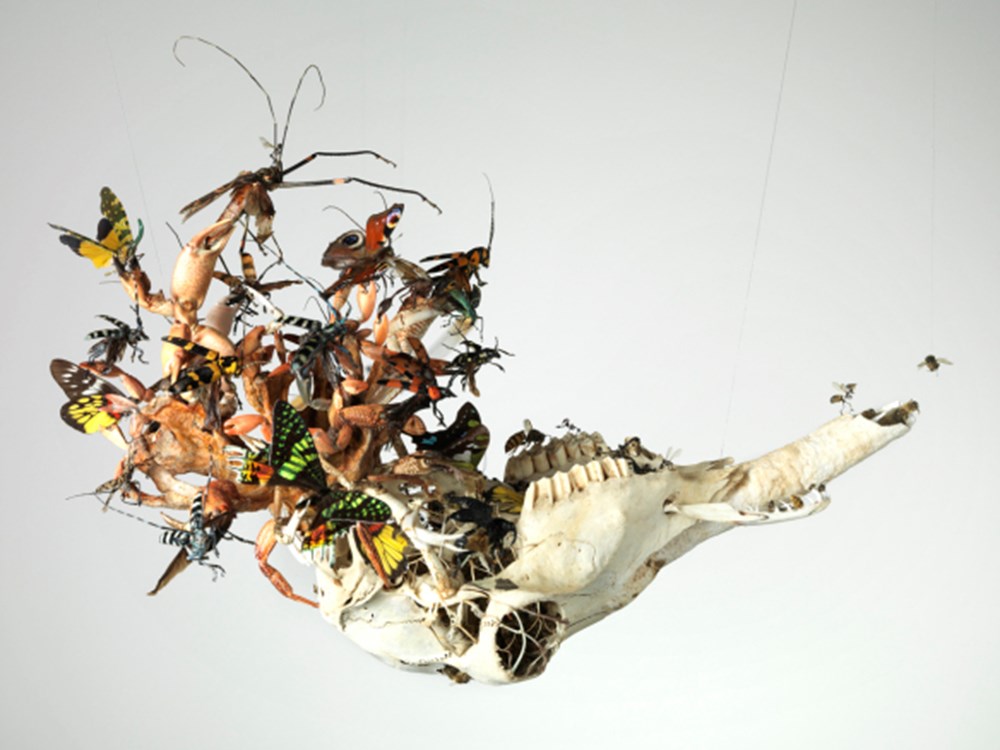 Her work revolves around an army of tiny fairies – made from the roots of plants found in her mother’s garden – terrorizing poor, stuffed critters: cats, hedgehogs, foxes and, in this case, a Tasmanian brushtail possum. I interviewed her twice, in London in 2009 and more recently in Hobart in the lead-up to the opening of the Red Queen. One of the questions I always ask in my interviews is, ‘How do you define success as an artist?’ Both times, Tessa told me her ultimate objective is for the fairies to take over the world. She says it with a smile – of course she knows they can’t really take over the world – but still, the objective of her art unfolds within the internally cohesive, closed-loop narrative world of her own making. The same goes for the fairies themselves. In 2009, I asked her: ‘Why are your fairies so mean?’ expecting an answer along the lines of, ‘Historically, the figure of the fairy has been anything but sweet and innocent. I’m interested in drawing out those more macabre elements’, or, ‘My work is a fable about the ferociousness and futility of human conflict’, or, ‘I am making a statement about the way we wage war on the natural world’. Instead, I got: ‘Because they’re ambitious, because they’re greedy. They’ve got to eat’. From that interview:

Elizabeth Pearce:
Are you on their side?

Tessa Farmer:
I suppose so. That sounds a bit mean, but – yeah, I suppose I feel responsible for them. I’m satisfied by their progress. It makes me happy.

EP: So you’d feel guilty if they went hungry?

TF: Oh, I wouldn’t mind so much...  I really don’t know very much about them, to be honest. It’s a bit frustrating. People keep asking me about their social structure.

TF: Yeah. Like do they have a queen? I don’t know. Do they mate? I don’t know, I don’t really want to know. It’s embarrassing. 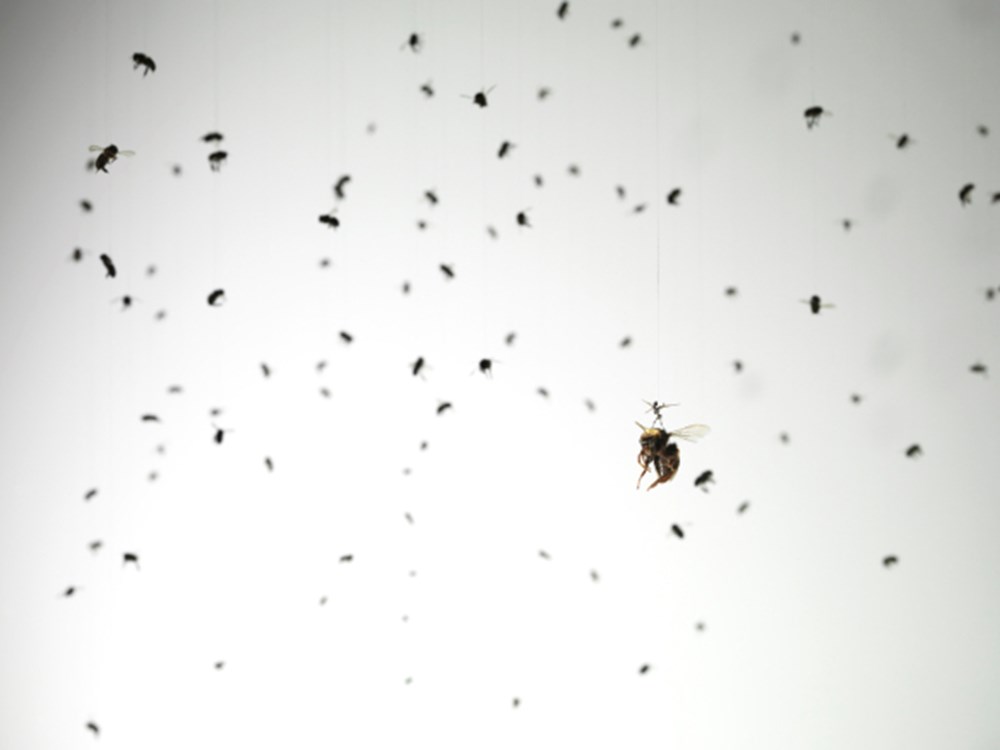 In The Depraved Pursuit of a Possum, the fairies are conquering a bees’ nest. ‘They learnt to control bees in Britain, and they seem to be controlling the honeybees here in Tasmania quite well, too,’ Tessa told me when I spoke to her in June. They are apparently using some sort of unspecified mind-control to do so:

TF: I think it might be pheromones, and maybe dancing – you know, like how bees dance to communicate where flowers are. Lots of insects communicate through pheromones.

Once enslaved, the bee-sting power is sublimated to more sinister use: the torture and destruction of a (taxidermied) Tasmanian brushtail possum. (‘Wouldn’t the wasps evolve behaviours to counteract the predation of the fairies?’ worries Tessa momentarily, before brushing the thought aside).

TF: I thought the possum would be quite easy to overcome, but they make these horrific noises and have these big claws. When it actually arrived [from a taxidermist in Launceston], I realised what thick fur it had, and wondered whether the bees would be able to get to the skin of the possum to sting it. It might all be completely futile.

Which bit, I wondered later, might ‘be completely futile’? Is this an existential, or entirely pragmatic matter?

TF: They’ve developed a mutation where they have – this sounds so ridiculous, sorry, I’m just mentally telling myself to shut up.

TF: The fairies have developed a mutation so they have crab claws on their heads, to grab the wasps with. We collected the crab claws a couple of weeks ago at Lewisham [Tasmania]. They’re really tiny because the fairies are only one centimetre in size.

EP: Amazing. And I’m correct in saying the fairies are anatomically accurate?

EP: I remember when I spoke to you last time you were worried because they didn’t have kneecaps.

TF: Yes, but I’ve gotten over that. I have to learn to stop putting myself down.

EP: Yes, I must say the lack of kneecaps is not a major issue for me. What are they going to do with the possum once they have it?

TF: Eat it and use its bones to make bigger, more elaborate ships and architecture, and probably use its fur, I think.

EP: Do you want the viewer to take away some kind of environmental or social message from your work?

TF: No. I wouldn’t mind if they did, but that’s not my intention. I’m far too involved in the story.

‘I’m far too involved in the story’, she says. I have recently encountered a theory (de rigueur in some circles) that has liberated me: we are more viable, evolutionarily speaking, when we create sweet stories about ourselves, and believe them. Others – both competitors and mates – are more likely to be deceived by us, to find us funnier, sexier, kinder and better parents than we really are, if we are deceived by ourselves. This gives me chills a bit. I didn’t really need to read it in a book to know that it is true. (To what extent it is useful to discuss in terms of natural selection I will leave to others to decide.) The notion has helped me accept the stories of the people around me, as opposed to trying to get them to ‘see the truth’: that their worlds are not autonomously animated by mysterious forces (God, the fairies, fate), but a result of a series of choices that seem natural and invisible to each individual because those choices obey a secret, powerful inner logic. Is the conflict we see all around us – most intensely between loved ones as opposed to strangers; those of overlapping but conflicting interests – the result of stories in collision? When others act outside our plot, refuse to play the part assigned to them, or, worse, call into question our own heroic role, this hurts and angers us; obstacles on the path to our true destiny (to ‘take over the world’, whatever that means on an individual basis). Interestingly, I have noticed that the traits people are most self-critical about are often not the ones that cause others the most pain (‘I have to stop putting myself down’, says Tessa). That’s the nature of self-delusion. The more you squint at it the more it recedes into abstraction, like those hidden-image stereogram patterns that were popular when I was a kid. The best we can aim for, I think, is a modest self-consciousness, an ability to momentarily see ourselves from without (‘this sounds so ridiculous…’).

Listening to the recording of my interviews with Tessa, they are full of laughter. I am laughing at her (gently) and she is joining in. This is the difference between the best and worst of us, I think. It is also the difference between a friend and someone who means nothing to us: the willing suspension of disbelief. Occasionally it has occurred to me to beg my friends to tell me what my self-deceiving stories are, but that’s not the nature of friendship. They might, perhaps, remind me when I’m a little ‘too involved in the story’; but mostly, I am lucky enough to have friends who laugh and cry in all the right places, reassuring me with their very company that it’s not ‘completely futile’ after all. 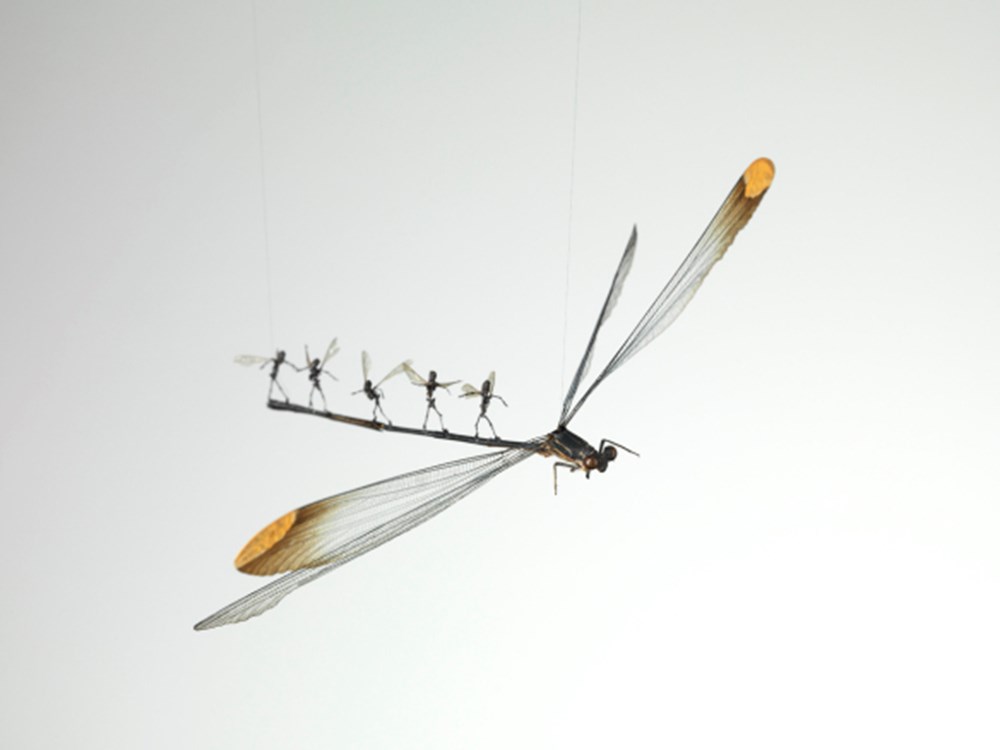 Reblogged this on Another Arty Blog and commented: ...a remarkable exhibit for anyone who had the chance to see it at MONA. A talented and very modest artist...

Reblogged this on phoebearmstrongarts and commented: These are fucked-up fairy tales of Bosh-like mini-daemons gleefully performing vicious acts on the cast of Wind in the Willows. I had seen her work at Art14 and a couple of other places - always surrounded by children squealing with delight and delicious disgust. But seeing her work in MONA was just so perfect: in a cave carved into a cliff on an island they call Tasmania off Mainland Australia.