Tim, my brother, died over twenty years ago. Some of my earliest memories are of him writing poetry. Before he died he had a plan to get some of his poems together for publication. But he didn't have time. Between diagnosis and death he had only a few months. And morphine and suffering kept him busy. 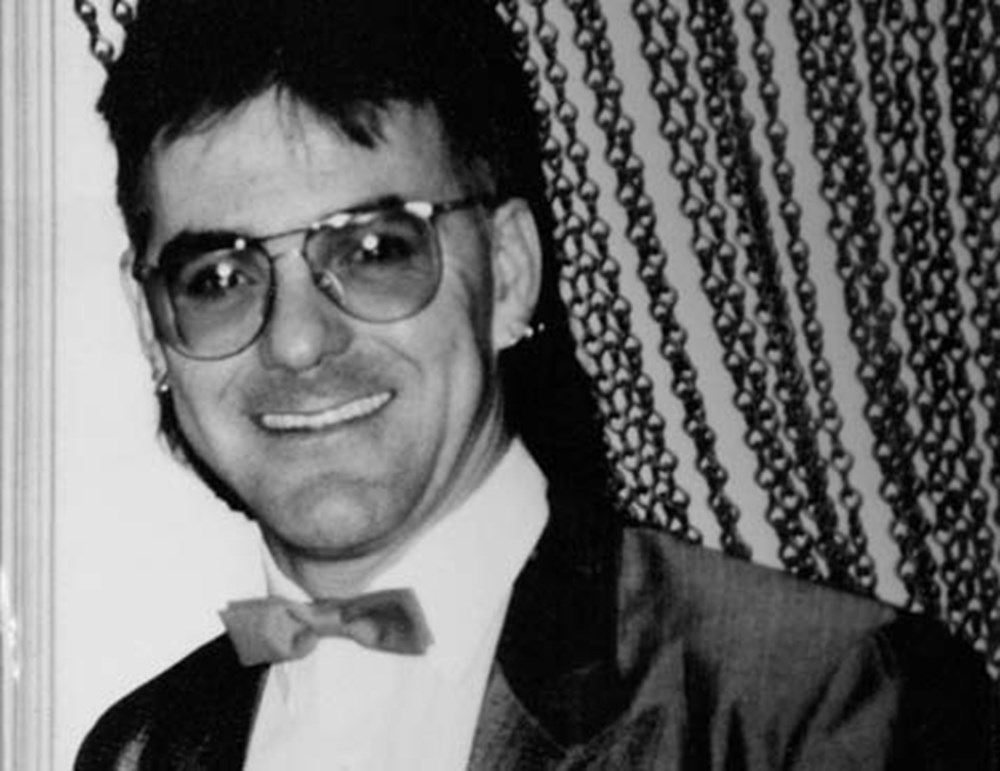 After he died I set about locating all the worthwhile material I could. But, to my continuing shame, I managed to lose a folder which contained a number of bleak, beautiful poetic capitulations to his condition. His cancer didn't come out of the blue. He had a congenital condition, choledocal cysts, which had been operated on when he was just six months old. The result was arguably positive, death was deferred thirty-three years, but through those years Tim endured severe, chronic pain. The site of this type of surgery, it turns out, often becomes inflamed, and that led to his symptoms, and that led to his cancer. For some reason nobody told him that might happen. He, nevertheless, often speculated that he would die young. He didn't think his body could sustain the repeated insults.

I know where I left the folder. On the stereo cabinet. And I know what was playing when I put it down. It was Paul Simon's ‘Most Peculiar Man’.

And all people said, what a shame that he is dead.
But wasn't he a most peculiar man?

I went to get the folder the next day, or the day after that, and it wasn't there. It hasn't been there, or anywhere else as far as I can determine, for those twenty years. So, just like Tim, that time has passed. There won't be a book of Tim's poetry. I only have a few poems left.

Tim was a little older than me. He read widely, mainly poetry: Shelley, Shakespeare, Betjeman, Byron, Tennyson, Masefield, Hopkins, Wordsworth, Whitman. And because I didn't know any better I read them too. He taught me stuff I didn't want to know then, but am very grateful for now. He showed me how to write amusing little ditties. This one he wrote when we were still children.

I wrote a simple poem.
A simple poem but mine.
And the words on every second line
Always seemed to rhyme.

And it parted in the middle.
Two verses my poem had,
But it finished on the eighth line,
And that kind of makes me sad.

He taught me about iambs, the stresses on every second syllable that Shakespeare used to astonishing effect. And he taught me about enjambment, running a sentence over the end of a poetic line, used to best effect with rhymes at the line breaks. Thus I wrote:

Playing with some stressful iambs
The line ran out before I could
Finish. I asked myself what would
Shakespeare do? And then I knew.
A ploy poets call enjamb-
Ment. When I write myself into
A corner. I escape just like Ham-
Let. That's as tricky as Harry Hou-
Dini.

As a surprise for my fiftieth birthday, some friends commissioned Dean Stevenson to set a couple of Tim's poems to music, and to play them at the party. It went well. One poem he chose Tim had written for my twenty-first birthday. He had been in hospital having another round of surgery, and was mindful of his mortality. Thus it began:

Time passes, and we being mortal, think of death.

The songs went so well, in fact, that Dean asked for more poems. But there are no more, he had already been given the eight that I know of. Those eight were, apparently, enough. Enough for this concert, at least.

Mum died in 2001. Every night between Tim's demise and hers she read a poem before she went to sleep. James, Tim's son, wrote in the note he sent to Dean when they colluded on my birthday present, that ‘Dad... composed this for my grandmother Myra, to help her feel some joy in his memory’.

When thine eyes have lost their soft dream shine
At pass of years and loss of time
And you are old and grey and full of sleep
When your heart is sad and your soul is deep
Stop. Reflect. Wipe away your tears
And think of the joys of bygone years
Think happiness. Friends and laughing lovers
Think of good times, come, think of others
But should no joy come from your past time
Take down this poem and read its rhyme
Hold it tender, close, and near to thee
Think of one friend. Think of me.

When Tim went into hospital he was already dying, but we didn't know. They opened him up, confident they could fix him. When a mooted four-hour operation took fifteen minutes we knew something was wrong.

So all the interventions became palliative. A nurse was assigned to show Tim how to use oral morphine. Tim said, ‘I know all about that, I had to administer it to my son, Billy’. Billy was born with disabilities, and dead at eight months. Dad said, ‘We die in the wrong order in this family’. Dad was already seventy-five, but destined to live another eighteen years. They sent Tim home.

At home Tim played his girlfriend and me a song, ‘Stuff and Nonsense’ by Split Enz. The chorus goes:

And you know that I love you
Here and now, not forever.
I can give you the present
I don't know about the future
That's all stuff and nonsense.

Dean Stevenson and the Arco Set Orchestra will perform Tim Passes at Dark Mofo on Thursday June 12, 7pm at the Odeon Theatre.

David
I met Tim for the first time in the refectory of the CCAE in Canberra, and from that first meeting we became friends. Your brother was a remarkable man and I count myself lucky to have know him. Not only did he introduce me to someone who was to be come one of my closest friends, he also shared his love of music and sport with me. Tim is the reason that when I moved to Melbourne I chose to follow Collingwood, I remember Tim and his daughter Anna singing the team song. I met Tim just after Billie had been born and watch how he dealt with what must have been an extremely painful situation.

I lost contact with Tim when he moved back to Tasmania and was shocked when I learned he had died, despite his being sick on and off for the whole time I knew him I didn't expect him to go so young.

As an aside it occurs to me there may be copies of some of Tim's writing in the archives of the student newspaper of the CCAE (now the University of Canberra) called Ccaesariean I worked on it around that time and have a vague memory of some of Tim"s writing appearing in it.

I miss Tim to this day and when I think of him I remember the day he came into the Refec and told us there was a man on his roof, he had said hello to the man but hadn't asked what he was doing and the man hadn't offered an explanation. I think he wrote that incident into a story which was filled with his own brand of humor.

Unfortunately Tim's move back to Tasmania was predicated on his illness. He died shortly thereafter, so you would have known him, essentially, until his demise. Thanks for the tip about Ccaesarian. I note that it's held in the National Library, so I'll have a look next time I'm in Canberra.

David
I am still in contact with one of the nurses who cared for Billy. I thought I might have had some of Ccaearian but alas I don't, good luck in your search

Thank you David.
This is about love and memory:

Thank you David such beautiful words. True Love is all about creating happy memories so that those that we loose can remain close by in our spirt & memory for generations to come. . I was married to one of your first cousins Olga Spencer's Your Mother (Myra's sister) eldest son who also is a lovely poet.
Hard work keeping up with them after growing up over seas to a family of eccentric academics come artist.But I did for a quite while...Divorced now with two lovely talented sons with the surname Spencer. One is a math physic wiz! The other is an amazing artist...Both at Uni studying one studying animation who I believe will win an oscar one day. Watch this Space!. He might be knocking at MONA's door for work experience....I have visited MONA many times. Although we do not live in Tassey. Love it as do my two talented sons. You have truly brought magic to Tasmania...Keep up the great work!!!! Penny Fox

Sometimes memories are the only things we can hold on too.....beautiful!

Yes, my family is the same. Great post David

Not so peculiar was Tim, just my best mate.

Thank you David such beautiful words. True Love is all about creating happy memories so that those that we loose can remain close by in our spirt & memory for generations to come. . I was married to one of your first cousins Olga Spencer's Your Mother (Myra's sister) eldest son who also is a lovely poet. Hard work keeping up with them after growing up over seas. I did for a while...Divorced now with two lovely talented sons both at Uni one studying animation who will I believe win an oscar one day. Watch this Space. He might be knocking at MONA's door....I live in Qld but have visited MONA many times. Love it as do my two talented sons. You have truly brought magic to Tasmania...Keep up the great work! Penny

David,
I personally am not a fan of poetry but envy those that are. That entire story is so raw that it has shifted my sense of self.
Mark

How touching..there is a space we hold dear, love born from a tear

I love that song " Stuff & Nonsense". Tim was obviously loved a lot in spite of his peculiarities. All us peculiar people hope for that, I think...

That is a lovely piece of writing David.

A fine man still fleetingly with many.

Beautiful thoughts of your dear brother. I remember the day you recited one of Timmy's poems to me. You are very clever at remembering so many things word for word. It was after I had express my live of the poem 'daffodils' which also you knew word for word. Timmy's poem as I remember it, and I would like to say went something like this...... I am not that clever. It was about, as I lie here......you float? Cut a long story short, it was taking a bath and his penis/cock/dick/genital bits/bit floating, it was a fantastic poem. I hope one day when you are not looking you find the rest of Timmy's poems.
Rae