I've used this strategy before, I know. Giving the game away with a dictionary definition is such a simple segue into a blog that it should be beneath me. Again, it isn't.

We (not Paul and Sylvia) are expecting the birth of a child. The well-paid and expert expectators that we visited to view the child in utero tell us that we will have a girl on July 19th or thereabouts. Definitions 4,2 and 1 are aligned here – we have justification to look forward to the birth of our child.

I have expected children before. I have also been married before. But I have not, hitherto, held these desirable states simultaneously. I am, inadvertently, upholding Catholic family values for the first time. Nevertheless, there is compounded joy in having many things go well. And I like joy.

Kirsha is also joyful about expecting a baby. She thought it would take a while for her to 'fall' pregnant. It didn't. About a billion generations of our ancestors also fell pregnant, so how could she doubt the efficacy of our evolution-given efficient reproductive engines? Of course, many potential ancestors of many potential sexual organisms failed to get laid, or failed to get knocked up, or didn't produce fertile offspring. That's the very thing that honed the engine.

Not all kids are planned. My first two wonderful children (one of whom is now a wonderful adult) were, in part, the result of my natural capacity to defer the consideration of consequences while simultaneously seeking pleasure. I can't really admire the ineffable subtlety of evolution entraining biologically useful behaviours in me by making them pleasurable. That would be similar to commending thermodynamics, or extolling the virtues of the law of gravity (which is a pretty bloody good law, actually).

That this kid, this homunculus-human, this proto-girl was planned is, however, a joyful joining of our biological nature and our human capacity to make choices. I can make a decision on behalf of my genes but also through the 'me' that they engender, to propagate them. They exert their influence by contributing to my state of mind. In fact, they elegantly exert their pressure by enabling me – I am conscious because of their inadvertent motivations. This process is all the more exquisite because it produces its outcome without any semblance of goal seeking.

As I said, I can make choices. Delia, my advisor on delicate public matters, delicately advised me to produce a blog confirming the rumour that I have herein clearly confirmed. Initially I resisted. And then I thought of a potential time to come when that rumour is an adult, and that adult wonders what those whose wills and drives produced her all those years before had on their minds at the time. This blog, then, is my answer.

This contrivance that induces in me my desire to pump out children, and words, also enables me to be aware of, but not enslaved by, the mid-term repercussions of my actions. A quick glance at definition 3 reminds me: I expect to be very tired from this trip. 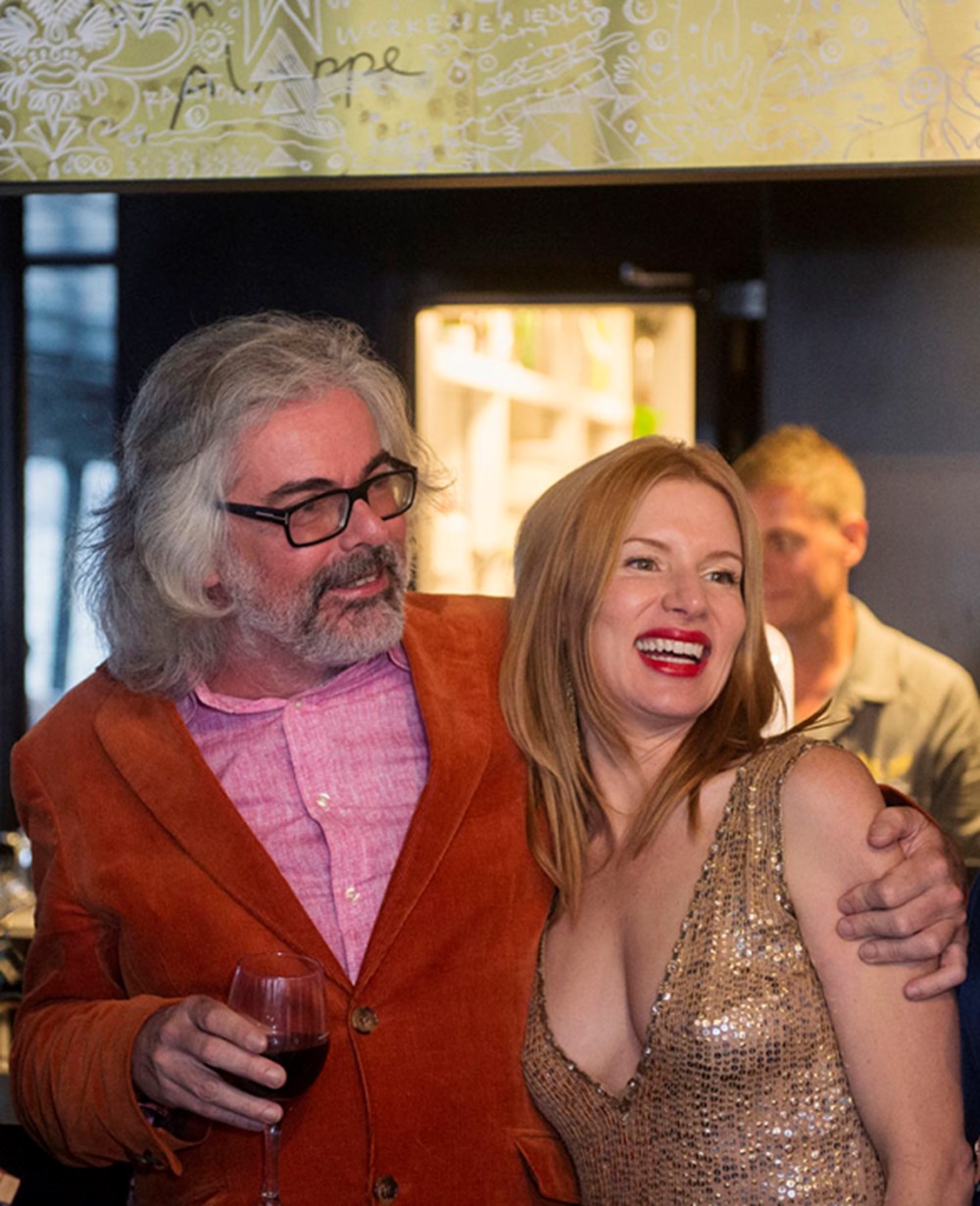 Jonathan Wherrett (image has been cropped from the original).

Congratulations. Wonderful news indeed. Wishing you both all the best. Make sure you flood us with photos.

What beautiful news for you both. Wishes for a happy and fulfilling pregnancy and birth. Such an amazing gift it is to carry and be near our little creations. Enjoy ever moment.

Congratulations to you both. That is wonderful news.

Congrats! I'm sure she will be lovely.

Happy news to all here is no greater pleasure.

A girl ! You can't go wrong! Congratulations to you both.

CONGRATULATIONS ....A LITTLE GIRL...HOW WONDERFUL
ALL THE VERY BEST !

Congrats to you both, what an incredible journey u are having David,remembering you from Parkers billiard table workshop with your dad,to this exiting time in your life .great choices David .cheers .john,Ginny parker .

Congratulations to all, expecting parents KK and David, Jamie-lee and Grace and all other relatives. It is the most wonderful news. Wishing KK a healthy non tiring non morning sickness pregnancy and David I'm sure you have it all sorted.xx

I'm glad you listened to Delia. I just stumbled upon this note and it put a smile on my face all the way in Berlin!! Congratulations. Enjoy!

Congratulations to you both. What wonderful news!
All my love Jenny

Wonderful news, congratulations to you both!

Dear David Simply, I am your big admirer and this is most cool way to spread good news. I wish you wife easy pregnancy. You are amazing person and I am bathing myself daily in your memoires. There are so many people in this country who simply love and adore you and I am one of them. Best of luck in all you do! My kind regards Marija

Thou's welcome, wean; mishanter fa' me,
If thoughts o' thee, or yet thy mammie,
Shall ever daunton me or awe me,
My sweet wee lady,
Or if I blush when thou shalt ca' me
Tyta or daddie.

Tho' now they ca' me fornicator,
An' tease my name in countra clatter,
The mair they talk, I'm kend the better,
E'en let them clash;
An auld wife's tongue's a feckless matter
To gie ane fash.

Welcome! my bonie, sweet, wee dochter,
Tho' ye come here a wee unsought for,
And tho' your comin' I hae fought for,
Baith kirk and queir;
Yet, by my faith, ye're no unwrought for,
That I shall swear!

Sweet fruit o' monie a merry dint,
My funny toil is no a' tint,
Tho' thou cam to the warl' asklent,
Which fools may scoff at;
In my last plack thy part's be in't
The better ha'f o't.

Tho' I should be the waur bestead,
Thou's be as braw and bienly clad,
And thy young years as nicely bred
Wi' education,
As onie brat o' wedlock's bed,
In a' thy station.

Wee image o' my bonie Betty,
As fatherly I kiss and daut thee,
As dear and near my heart I set thee
Wi' as gude will
As a' the priests had seen me get thee
That's out o' hell.

Lord grant that thou may aye inherit
Thy mither's person, grace, an' merit,
An' thy poor, worthless daddy's spirit,
Without his failins,
'Twill please me mair to see thee heir it,
Than stockit mailens.

For if thou be what I wad hae thee,
And tak the counsel I shall gie thee,
I'll never rue my trouble wi' thee -
The cost nor shame o't,
But be a loving father to thee,
And brag the name o't.

I will have to practise making baby face cupcakes for July. Well done.

By the way, my iPad autocorrected 'monablog' to 'monologue' .... bahahaha

It's good to stick with the model you know this time, Kirsha's first I guess, but should you, David, wish for a boy next time, try Peanut Butter... I eat it every day and i've got three , QED