His sleepwalking pose and little boy PJs cue us for cuteness, so the craggy face is discomforting. He is stunted in stature, and stands not on a plinth, like a worthy sculpture in a gallery normally would, but on an ordinary table placed at a wildly sloping angle – with some salamis hanging from the front. I have no idea what the salamis are about, but I feel the pose, the altered body scale, and the wonky table, together convey the artist’s sense of helplessness and inadequacy in the face of art history. This interpretation is aided by the fact that Paul, who bears the face of his maker, is named for the performance artist Paul McCarthy, who I wrote about recently. When Paul was originally exhibited at Darren Knight Gallery in 2014, he was shown alongside similarly stunted figures in discombobulating poses, called Ray, Mike and Dave. According to my colleague, Mona curator Jarrod Rawlins, Ray is probably the artist Charles Ray, and Mike is Mike Kelley, who collaborated with McCarthy. Dave, it seems, is the astronaut from 2001: A Space Odyssey.

Insecurity and unstable identity are recurring concerns of van Hout. (He returns to these themes ‘like a dog’ – for some reason this phrase, from the title of an exhibition by the British artists Jake and Dinos Chapman, comes to my mind – ‘returns to its vomit’.) His body of work is populated by split, ambivalent manifestations of his ‘self’, as per the video Who goes there?, 2009, which shows van Hout repeatedly knocking on his front door and waiting for himself to answer. He obsessively depicts himself in altered form: as a sculpting dog or painting monkey; an Arctic explorer in crisis; dolls lined up in what might be coffins or display cases; or as a little boy in PJs (again), with one arm in a sling and the other stuck down his pants, a scowl on his adult face. His work has been described as ‘slacker art’: I don’t really know what that means but it seems to derive from the Richard Linklater film, called Slackers, that was seen to be a reaction to the hyper-materialism of the 1980s. A kind of meandering, lazy existentialism that to me seems inherently grotty and boyish, like Ethan Hawke in Reality Bites, slumping around the apartment making scathing, Shakespeare-referenced comments about Winona Ryder’s yuppie boyfriend. (Sigh.) There’s a distinctly Aussie-NZ edge to it, though (he’s from Christchurch). In the same show that the Mona curators picked Paul from, there is this video where van Hout reads lines from the disturbing 1998 film The Boys, playing both characters (originally David Wenham and Toni Collette) simultaneously. The deliberately dorky re-reading places the menacing tone of the dialogue at creepy-funny remove, and draws out that slight cultural cringe we still feel sometimes when we hear Australian accents on screen. And the video work I’ve Abandoned Me, 2004, shows two Ronnies, one regaling the audience with the woes of his career as an artist, the other standing still, seemingly petrified, watching Picnic at Hanging Rock. 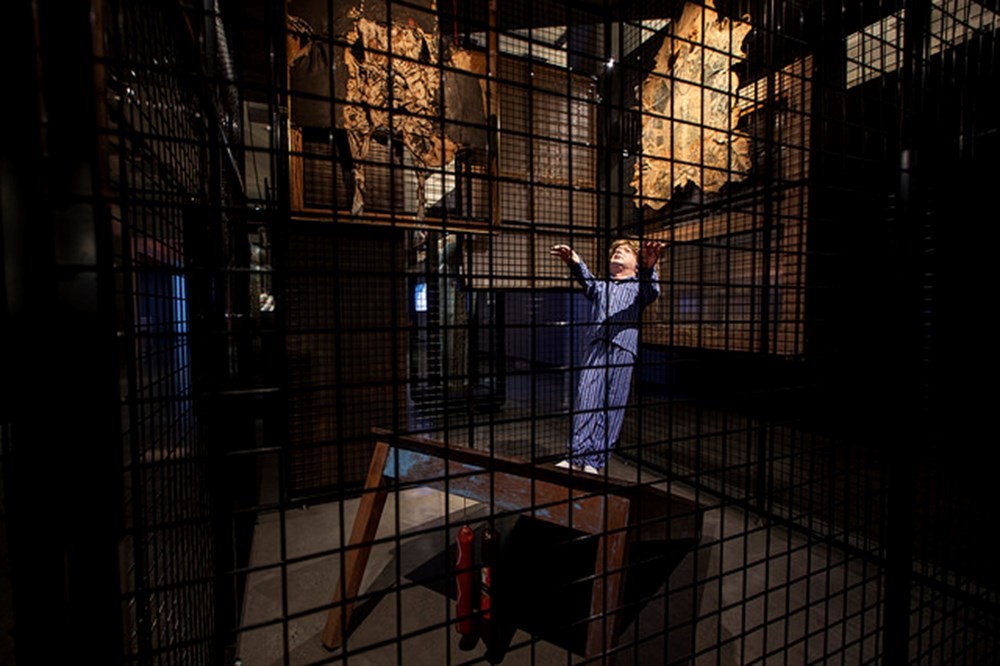 Paul was moved recently in our gallery, to a kind of art-prison that intensifies the sense of suffocating artistic influence: in his new spot, he is hemmed in on all sides by other works, and by a display-cage that reminds me a little of the way Francis Bacon boxed in the anguished masculine subjects of his paintings. I asked Jarrod if this was the reason for the move, and he said, ‘Wow, you really are becoming a wanker.’ Apparently they needed to fill a space left by Berlinde De Bruyckere’s melancholic, elongated wax horse, and Paul fit perfectly. So in he was popped. 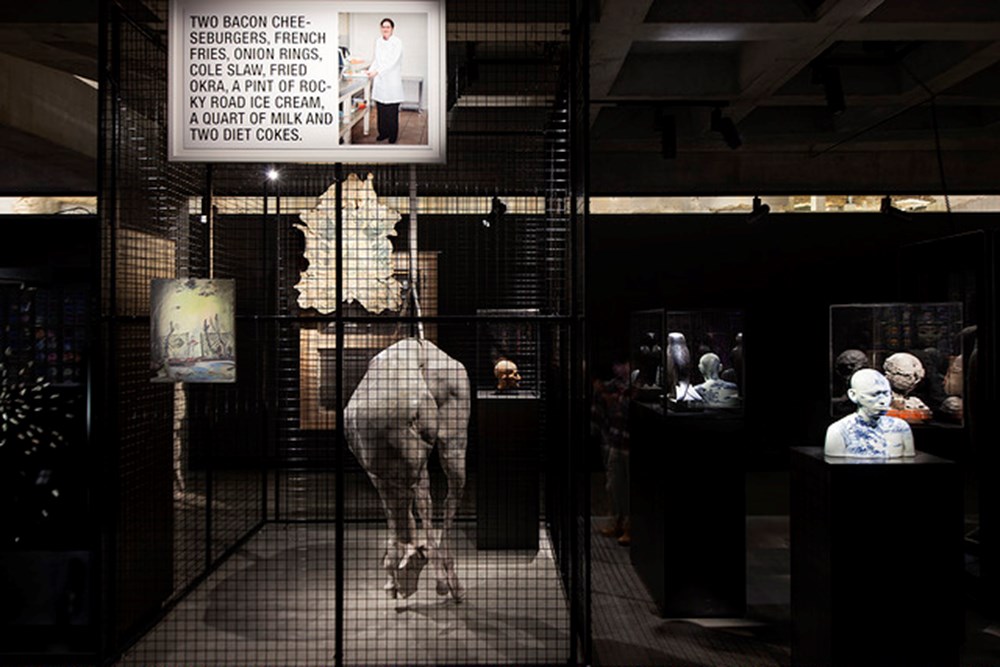 P XIII, 2008, by Berlinde De Bruyckere, is off display until our exhibition On the Origin of Art opens in November.

Later: Jarrod texted the artist about the salamis, and his reply was pleasingly circular: they ‘came with the sausage strings’ he ‘ordered from the States.’ He added: ‘I thought I’d add them as the “balls” of the table and a plumb bob showing the vertical.’ Roger that.

Jarrod also says (and he’s speculating now) that the snags might be a reference to McCarthy’s penchant to do weird and gross things with sausages, as in his performance works Hot Dog, 1974, Tubbing, 1975, or Heidi, with Mike Kelley, 1992. (I’m relieved I wasn’t a wanker enough to think of that on my own.)