Elizabeth tells me Jannis Kounellis is dead. I already knew that, obviously. It demoted Putin and Trump to the second page of the National Enquirer. She wanted me to write a blog. Coz, you see, I like death. And Kounellis, who was alive, now isn’t. But I don’t really like death that much, and even though I’ve only met him twice, and haven’t seen him for years, I would prefer him to be alive. 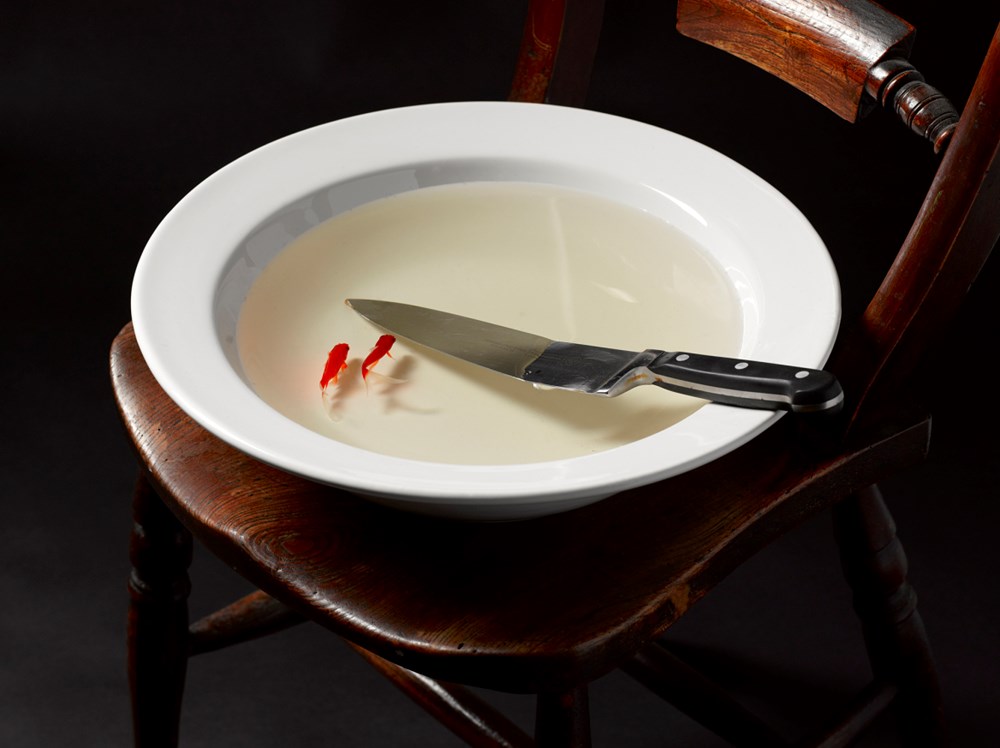 He came to Mona, and he put a knife and a couple of goldfish in a bowl. People complain incessantly about that. Because the only reason that we should torture animals is for food. Entertainment, or social commentary, or art—that’s just indulgent. Our goldfish go home to a bigger tank, but that isn’t good enough. Our fish atrocity would only be appropriate if we ate them. There is no other way, as we all know, to get calories. No one has ever survived longer than six seconds without eating meat. Did you know that six seconds is the attention span of a floret of broccoli? 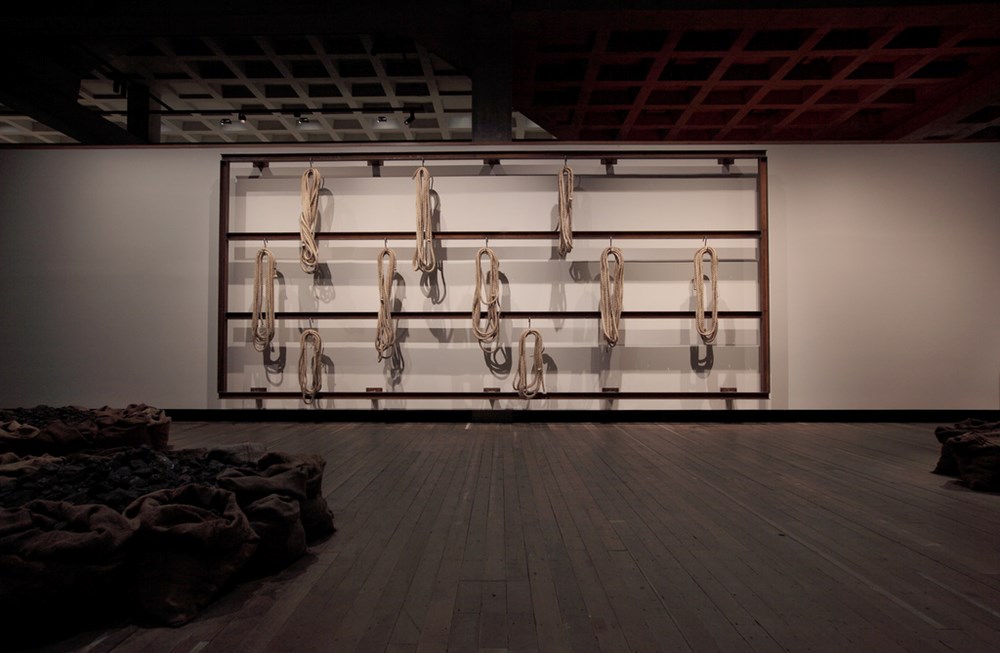 Kounellis also ruthlessly sacrificed lassos to the temple of art. The aesthetics are irreproachable, and we rarely take that work down. Elizabeth said that work, and the fish and the knife, are free of the ravages of metaphor. Knife constrains fish, rope restrains bull, art maintains ethics. Except when art persecutes goldfish. 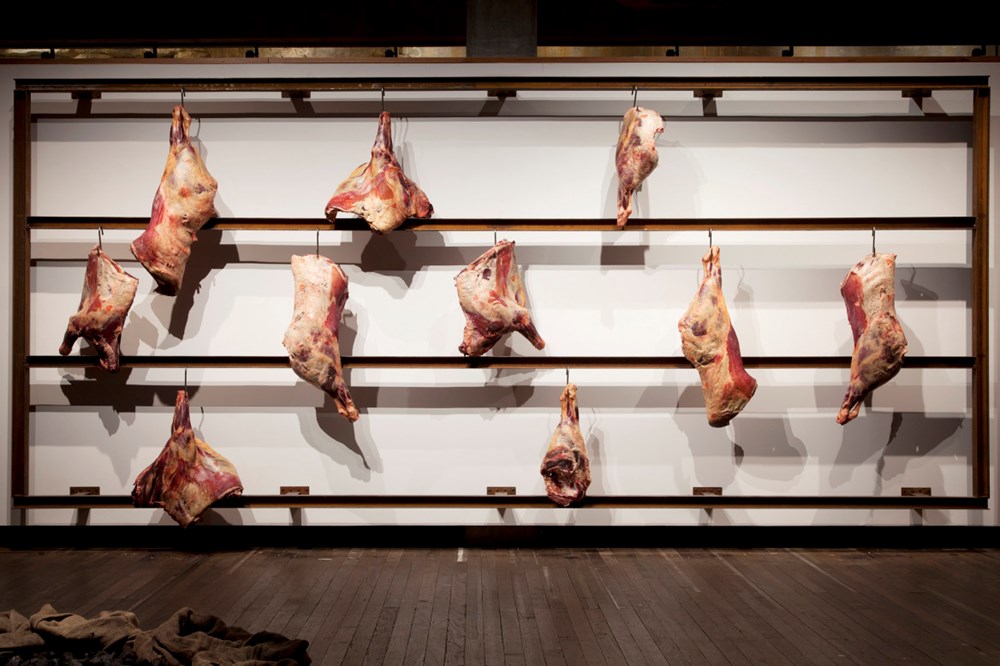 Or meat. Occasionally, when perverse whim pervades, loops of rope are replaced by sides of beef. Few moral issues here. The meat was made to be murdered. A few sides of beef among the millions bred to be cooked medium rare. But hung on the Mona wall carpaccio. Just to show our sophistication.

Kounellis is dead. But he is so recently dead he is still meat. If his body, his corpse, the meat of him, were here, I would hang him from a hook. But it wouldn’t be him, it would be a metaphor for him: his art, his life, his greasy greatness.

There on the hook, not wriggling, not creating. There would be all that remains of a man, an artist, a husband, an adopted Italian, a Greek denier, who taught me to look beyond the superficial. He helped me to see the links in the chain that bind us to iniquity, but are all the more stifling because of their invisibility.

Eat your meat. Dine on Jannis Kounellis’s corpse. But be sure to free the goldfish.

If I die before you David (which is likely), I wish you would help write my eulogy!

Compassion and sympathy are readily evoked by witnessed acts. People see the tender, living fish next to the menacing blade and most cannot help but feel dis-ease, if not compassion. on the other hand, we do not see the 'murder' of the cattle, and it is thus hard to perceive it as murder or grieve for the animal. No doubt many more people would become vegetarian if they visited an abattoir...but just try to get them there... I find it hard to see these things in moral terms, but it just seems to me like human nature - in fact how we have evolved to be. We have also evolved to be omnivorous. It is perhaps unfortunate that the ground of our being is not the moral high ground.

So we have short intestinal tracts and the ground of our being is survival. If inhabiting the moral high ground meant a hell of a lot it would be commonplace. And if we couldn't identify with our victims we wouldn't be a shadow of what we are.

Check out an abbatoir or a pig farm or chicken farm & still tell me meat is meant to be murdered. They are modern day Auswichs (or however u fucken spell it). Don't even respond until u visit and smell one & see how those animals exist. Hell on earth

Not only do some say eat, fuck, die - but just consider ever hour you live is one hour closer to death. it is a nice thought

The King is dead. Long love the fish.

I feel obliged to think about it.

Dear God
(David Walsh)
I should like to meet with you
I have something I wish to show you
I have been seeking a solution to an all important matter with no success for quite some time now .
Some have suggested
I pray to god
I see he resides in your car park
So now that
I've discovered where he lives .
I'd appreciate his opinion concerning a complex matter which has held me in a vice like grip for way to long
If ?
it's god who makes dreams come true if it's god whom one must ask for help
when he knows not the way forward
Then dear god I'm asking !!!!